Catching up with modelling activity

I have fallen a few days behind on reporting the progress in the modelling bunker. The weather did a bit of a turnaround and gave us some 80 degree days, but in September the nights tend to cool things down wonderfully. Given my employment status and my natural cycles, most of the modelling I do comes at night anyway.
In terms of construction, I’ve been pounding away on a Revell P-47 (after painting both the wheel wells and the cockpit) that will use the “Sigma Nu Girl” decals I’ve had for a while. Also, I’ve started on a Eurofighter and Tornado to showcase other recent decals as well. Finally, I’ve gotten the major bits together for an F-16C that will carry District of Columbia ANG anniversary markings. Believe it or not, this is the first F-16 I’ve ever built. I’m using the Hasegawa kit.
The paint room has also been busy. Besides getting the first coat of white on the substantially complete Valiant (and a fine kit it is), I’ve gotten the Dark Sea Grey coat applied to the Attacker. The Swift is fully painting and awaiting decals. It should show up in the finished column shortly. 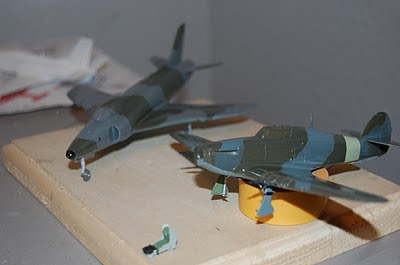 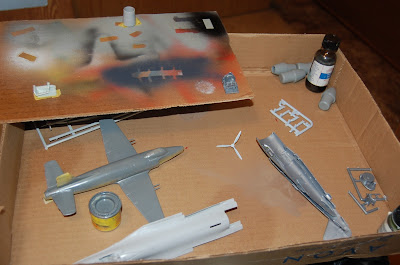 I’ve been having confounding paint issues with the Hobbyboss Seahawk, though. Though the paint seems to go fairly smoothly, it manifests some very pebbly surface texture in a couple of places, notably the horizontal tail surfaces. I just assumed I put too thick a coat on it, or perhaps got a bit of water into the airbrush stream (my compressor is pretty medieval and without a water trap). So I buffed down the tail and reshot. Same result. I buffed it down again and used a different tin of Xtracolour. Same result. I am going to shoot a very thin coat over it all again this evening. Anyone who has been reading this blog knows that I am badly infected by the bane of all (good) modelers, impatience. But really, it has had a number of chances. Not sure of the root cause: some chemical contamination on the plastic? But would it still be there after numerous sand-and-repaints?
I’m not sure why I’m producing so many Cold War British aircraft at present. Maybe it is because the mainstream modelling companies have finally discovered the era (or run out of options for anything else) and have begun turning out kits. Airfix Valiant, Trumpeter Lightning, Hobbyboss Seahawk, Cyberhobby Sea Vixen. But I’ve always been a Britophile, so it really isn’t much of a surprise. I’m considering doing another trio: Heller Vampire, Airfix Javelin, and Xtrakit Scimitar. The only disadvantage is that these kits are either short-run or, shall we say, not current state of the art. But hopefully the Profoundly Average Modeller can keep from making a mess of them.
One problem I am going to have to confront is storage, what with the Valiant, B-47, B-1, B-50 and 707 working through the queue. Besides my three 6’w x4’h x3’d ex-retail display cases I bought in the 90s, I have been constructing little flat boxes out of shelving wood with a sort of poster/particle board as the bottom and a sheet of thin glass laid on the top. They were never really meant to be permanent. Just a temporary stopgap until I could afford to buy a nice tall 6’w x 7’h x 2’d display case. But as with so many “temporary” situations, this has been in place for a long time. I’ve already picked out the case, but at $1600 it certainly isn’t going to happen until I resume drawing an income, and even then there are more pressing issues (house repairs, property taxes) that will take first place in the money-eating stakes. But when I do get it the model room will be truly majestic. The current cases, along with the airbrush area, are all in the garage.
My model production, due of course to my employment state, continues to be high. I am just finishing my 27th of 2011, equaling the total for 2010. And the last four months of the year are always the highest for number of completions. There is a good chance I could hit 40 this year. The downside being that if I do hit that lofty number, it will likely mean I haven’t hooked up with another PM position, which will shortly become a disaster of epic proportions when even the minimal unemployment funds run out.
Posted by Kevin Callahan at 4:52 PM No comments:

Summer is drawing to a close here in the northwest. It has been a very nice one – in fact, the highest recorded temperature in Auburn in all of summer 2011 that I can find on weather.com was 85. That works for me. I am not constitutionally built for heat, which is one reason I moved away from Southern California in 1985. Any city whose highest temperature was 100 even, and can have a summer perpetually under 85, gets my vote.
We went out to the 2011 version of Harbor Hounds, a dog event in Gig Harbor. This year it was Harbor Drowned, since the weather chose today to reintroduce we mossheads to the glories of Seattle rain.
Since the model room and the garage were cooling down, I was able to get some construction and painting done. There are actually a couple of painting sessions combined into the following photos. The Valiant has gotten all of its detail painting done, was masked, and is now getting its first coat of white. One roadblock – I appear to have run out of white paint! Sounds like it is time for an order of Xtracolour. 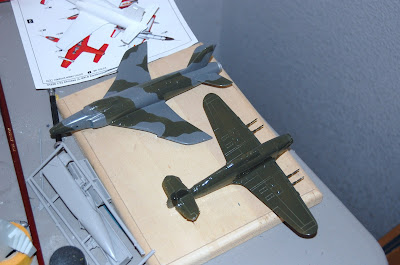 The trio of Cold War Brit fighters – Swift, Attacker, and Seahawk – have gotten their wheel wells painted Alclad White Aluminum and the Sky has gone on the Attacker and Seahawk. While I had the Sky paint out, I did the fuselage band on a Hurricane. The Swift is a little farther along, and already has the lower surfaces done in PRU Blue. I was able to paint the Dark Sea Grey uppers and the Dark Green camo. 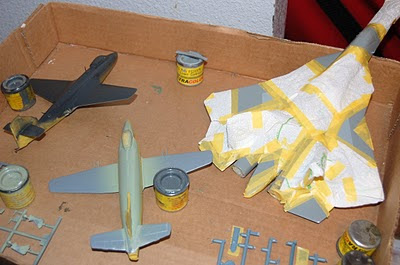 The Sukhoi T-50 is in queue for its camo area of Gloss Sea Blue. Not a color that Soviet aircraft are necessarily known for, but that is a Zvezda interpretation. They do use a number of unusual blues on their Su-27s.
A bit more wheel bay detailing in Zinc Chromate Yellow has been done on the B-47, along with the wheel wells of a P-47. I’ve been trying to group models that need the same colors, since painting is not something I’m terribly good at. 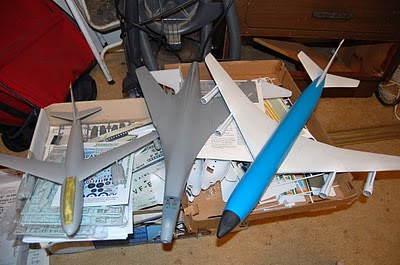 Lurking on the horizon is a B-1, and stalled efforts on a B-50, SM-84, and F-22. And you can see that the 707 has gotten the fuselage blue (for a Braniff jellybean). It still needs some detailing in Aluminum and the underside of the wings done in Boeing grey.
I kind of shake my head when I see all these large models that I start, given my upcoming storage crunch. I'll have to build up another temporary display box to accomodate the Big Iron.
As an aside, condolences to those related to anyone involved in the tragic crash at the Reno Air Races.
Posted by Kevin Callahan at 6:11 PM No comments: