I have completed the Academy Fi-156 Storch in the past: a desert version and an RAF captured version. While a bit fiddly, mostly due to the spindly nature of the struttery that comprises the wing supports and landing gear bits, it is a nicely made little kit that doesn’t require any filler and looks correct once built.

Sometime in the past I acquired the Four+ book on the Storch. Along with a nice little rundown of 12 markings schemes, it includes a decal sheet. Most of the markings are fairly workmanlike, though the grey one with the red tailband may find its way to my workbench at some point. On that sheet is a civil Storch, apparently owned by the Trumpf Chocolate Company, a 150 year old outfit known for their gourmet chocolate concoctions. This Fi-156 was originally a Czech aicraft, and was used for publicity flights in the 1950-55 period. It was eventually reconfigured as an ambulance variant and displayed in a museum.

I must admit I mischievously considered slicing off the final "f", in only to give the liberals in the audience a temporary case of the vapors. However, I came to my senses fairly quickly.

As mentioned, the kit is without construction drama, and the decals performed as expected. They are extremely thin, so you must be cautious when moving them from sheet to model. I did use a couple of Hiene prop markings from Kora 72091. 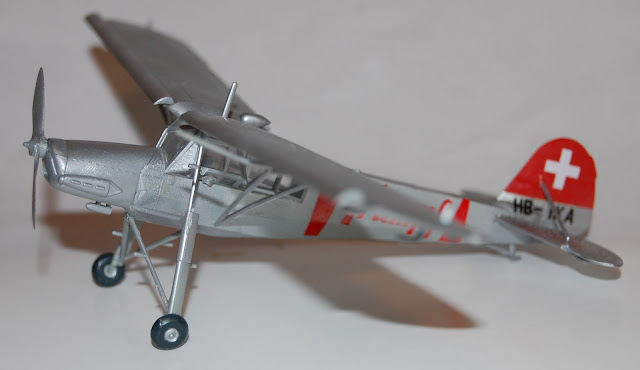 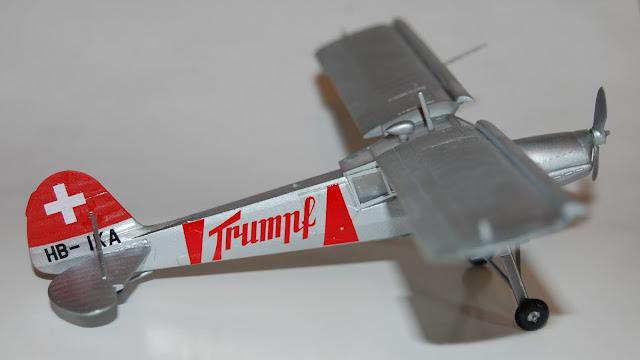 Posted by Kevin Callahan at 6:52 PM No comments:

That was a five star restaurant quality cluster. Since we weren’t supposed to be back til Labor Day, you can see that something went wrong with our vacation.

We knew that Sue’s broken foot could be an issue, but we decided to push on regardless. On the first day (freeway to Baker City OR) it did pretty well since she was able to use the cruise control and keep pressure off the foot for long periods.

Day 2, however, was lots of mountain driving (north through the Wallowa Mountains and through Joseph and Enterprise OR) and that was a problem. She was really hurting by the time we got to Lewiston and, since I am not medically cleared to drive for a while due to the defibrillator firing, a decision had to be made.

From 30 years as a project manager, I know how to make a tough call and live with the consequences, mostly by refusing to second-guess myself once it is made. But there really wasn’t an option – I was not going to force Sue to endure a lot of pain for the trip, period. So we got a hotel room in Pullman WA (never have been there before) and headed for home via I-90 the next day.

My folder of Vacation 2018 consists of precisely three pictures. But we’re back safe and Sue will be able to rest her foot for the rest of the week since she doesn’t head back to work til Tuesday. And the weather looks good for a few days, so the upside is that I should be able to resume my modelling activities, including some decal work to complete the two models shown on this blog before we left. So all is not lost here in 72 Land!

Here is a shot from the one stop that we did make during the Wallowa Mountains crossing, at the Hells Canyon overlook. 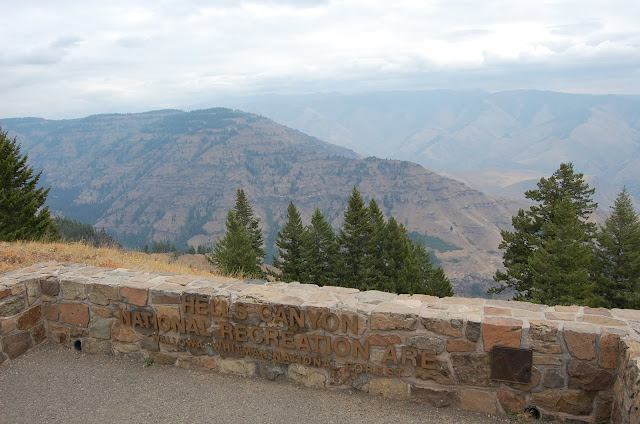 Posted by Kevin Callahan at 10:33 AM No comments:

Back in a week

As mentioned earlier, my wife and I will be on the road for the next 8 days. It's going to be tricky, since I have my health issues (the defibrillator firing means that I can't drive right now) and Sue has a broken foot! But we're going to give it a try and see what happens. The blog will be dark until at least September 2.

As a preview, I should be able to get the decals on the Fi-156 and probably the TWA Northrop Delta as well, shortly after I return. Until then, enjoy the waning days of summer! 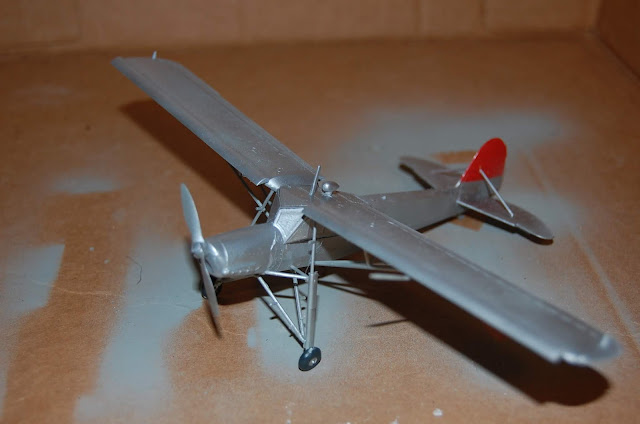 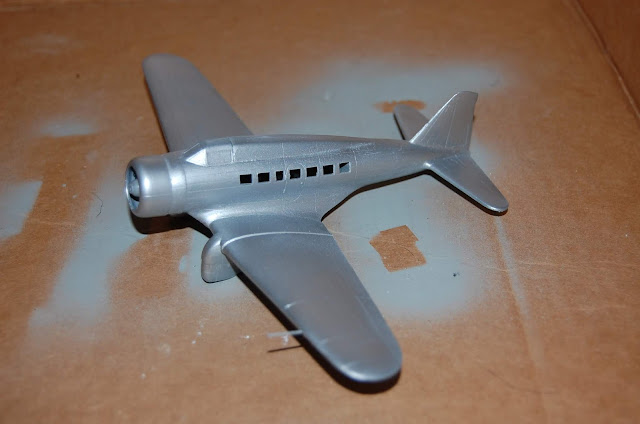 Posted by Kevin Callahan at 5:42 PM No comments:

Continuing with the recap of models currently in the production queue.

The American Gyro AG-4 from Avis and the Miles Aerovan from Mikro-Mir are both stalled a bit as I deal with questionable fit and the need for vast fields of putty. Still, not everything can be a Tamiya kit, and it will be nice to have these two unusual aircraft shapes in the collection. 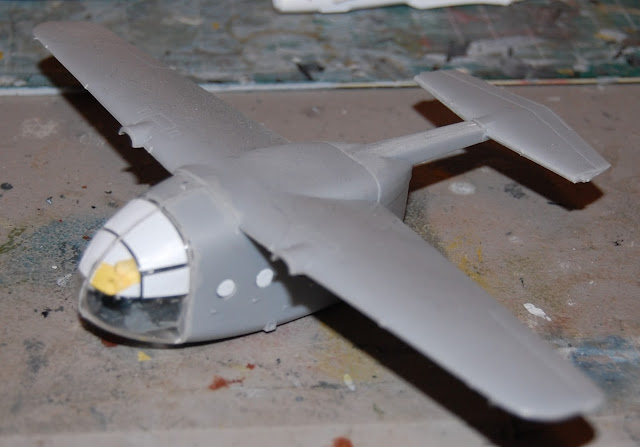 Both the Meng Ki-98 and the Brengun Ohka need cockpit paint. 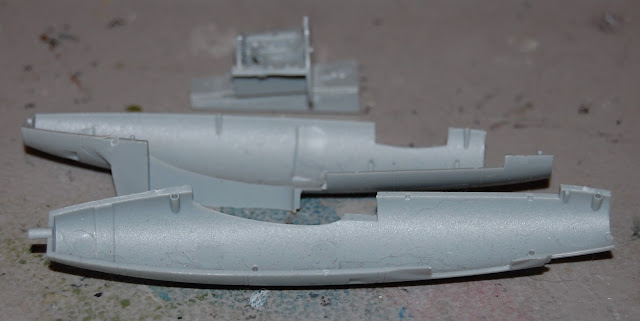 Finally, the AModel Raduga AS-1 Kennel (along with its associated transport cart) and a Sdkfz 222 armored car are waiting for paint and further construction respectively. 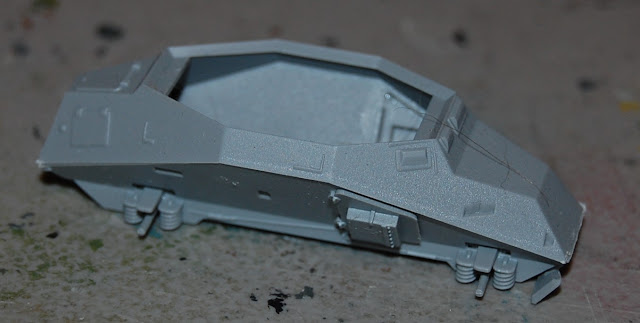 So, in total, this amounts to 15 models in various stages of production. Let’s just say I am not one to concentrate on one model from start to finish. I really identify much more with those of us who are considered “kit assemblers” rather than engineers. Nothing wrong with the engineer point of view – it just isn’t me.

Posted by Kevin Callahan at 10:19 AM No comments:

I thought before vacation starts I would try and give a recap of the models that are currently in progress on the 72 Land production line.

You’ve seen the results of the latest paint session. The Skyvan still needs its vertical tail surfaces painted in natural metal and have the engines and wheels added before decals can be applied. The Gamma needs wheels and a repair job on the pitot. The Storch really just needs painted wheels and it will be ready for decals (a choice from the 4+ book on the Fi-156 that I bet doesn’t get put into model form very often).

Beyond that, the T-45 is still in the construction phase, and needs a touch of filler on the sides of the intakes.

The F-15C that will carry those extensive Oregon ANG special markings isn’t even as far along as that, with much major construction to go.

The Fujimi Ju-87G is pretty much fully assembled, the cockpit masked, and the lower surfaces painted. I just need to mask up the lower areas and paint the top coats. 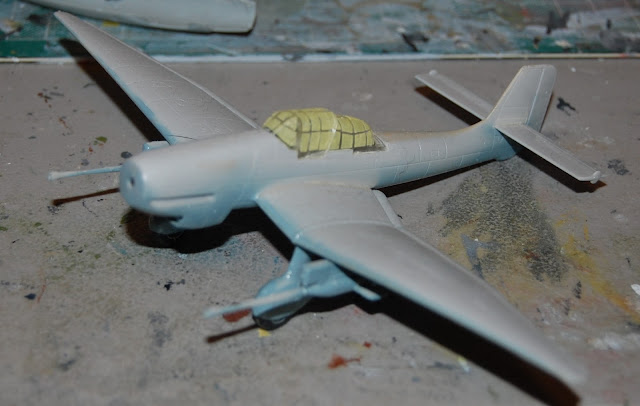 I’ve just started work on the AZ Models DeHav DH-88. Just the cockpit, really. I think this one will get Black Magic markings. Now with extra added cat hair! (Sigh). 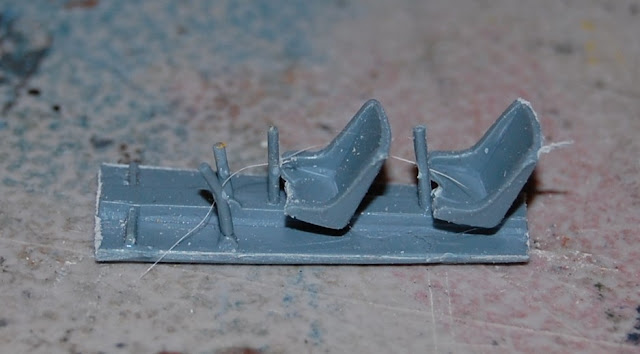 I’ve received the Avalon paint mask set for the Valom DH-91 Albatros. It will be nice to get that one back into gear; it really is an attractive aircraft. I’ve also gotten a masking set for the Trent Meteor so that project will go back into an active status shortly.

Posted by Kevin Callahan at 6:50 PM No comments:

This surprises me as much as it probably does you, but I actually got down to the garage for a short painting session this afternoon. We’ve entered into a couple of days of upper 70s and I wanted to take advantage before vacation prep gets to be too hectic.

Only three models received paint, and only two colors. The first was a repair job on the Airfix Short Skyvan. The last coat didn’t cover terribly well, and some putty work on the nose door joint was showing through. Not anymore.

I then put a coat of aluminum on the Fi-156 Storch and the Northrop Gamma. The Gamma was a bit of a nail-biter. You may remember that it met with a disaster in early summer. A primer coat ended up screwing up the Alclad paint that I attempted to spray over it. After literally a month of paint stripping, sanding and buffing, I figured it was as smooth as it was going to get and held my breath while spraying the NMF.

It didn’t go badly at all; it’s hard to tell that the thing is only a few months removed from getting close to meeting a bad end via a short flight into a solid wall. I’m still having some issues with Alclad paint getting a smooth consistent coat, though. Some spots seem to be darker and heavier than others. That might be due to my airbrush needing a deep cleaning or the fact that my compressor was built when dinosaurs ruled the earth.

No clue if I will get decals on the Storch and Gamma before we leave, but I won’t promise anything in case I can’t deliver. But at least three projects advanced and are nearly all ready for decals. If the weather behaves in September we could have even more progress. 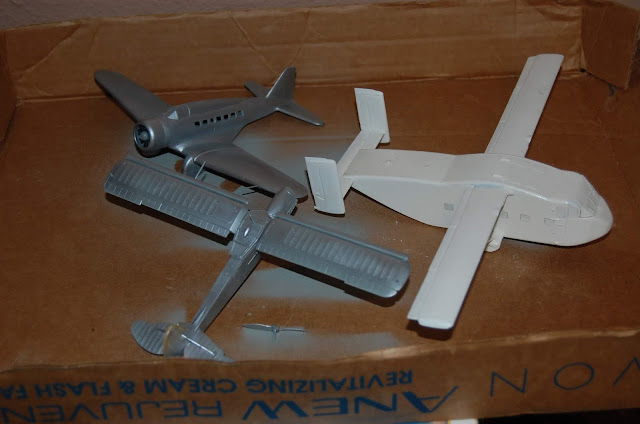 Posted by Kevin Callahan at 8:21 PM No comments:

For which I must apologize. This just isn't a good time of year for building models, even for the retired like myself. Most days it is just too freakin' hot. It is due to be well into the low 90s today, and for a state without much air conditioning, that means you just find a cool spot to wait it out.

Plus I've had a flare-up of some health issues that tend to make one not be in the mood to stick plastic together. Lots of stomach things, which I won't go into detail about for those of you with delicate constitutions.

Next Saturday (8-25) we leave on our annual road trip. Rather restrained this year: mostly northeast Oregon, central Idaho, Yellowstone, Bozeman and Helena. Since I'm still on driving restriction (due to the implanted defibrillator) Sue will have to take over driving duties, and she is not a road warrior behind the wheel like I am. So it is slow, steady, and short (8 days) this year. Still, we do get to drive on some different roads and see some new places, as well as visit a few old favorites. One never gets tired of Yellowstone.

So never fear, the 72 Land production line will re-awaken once the leaves start changing color and that autumn chill gets back into the air. As always, I have a lot of items in process, and will summarize where those are after we get back in town.

So for those of you with central air, the time has come to build something! 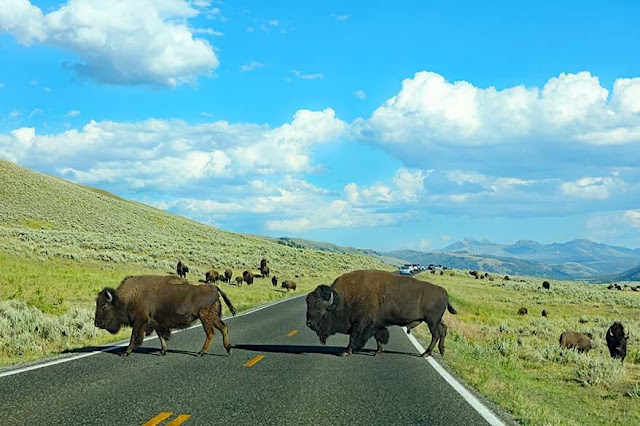