I wanted to take this opportunity to wish everyone a thoroughly Merry Christmas!

Also, an update. I've had the first surgery done in early December, but the doc decided to delay the second one til mid-January. So I'll be a little longer in recovery than I anticipated. The pacemaker / defibrillator has been implanted, but some adjustment needs to be done - one of the leads didn't plant correctly, which has necessitated the second round - and if it is anything like last time, I won't be able to use my left arm for about 2 weeks after the procedure.

I do have some modelling projects lined up for when I am fully functional: a Platz X-47, the Airfix ragwing Hurricane, and two Eurofighters that will be using anniversary markings from a couple of different Xtradecal sheets. This is addition to what must be a dozen stalled projects that mostly require paint. So I'll be facing down my personal nemesis, the airbrush, most likely in February. Somewhat akin to high noon here in the 72 Land corral. 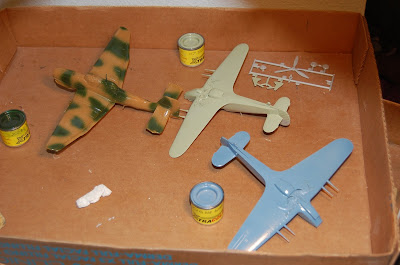 Since Falke asked the question, I decided it was probably a good opportunity to let you know something about what has been going on here lately.

Your benevolent dictator here in 72Land has been struck down in the last few months - since just about the time of the Seattle Show in April - by a series of health issues. Cardiac issues, a cancer scare, and a huge load of abdominal fluid that resulted from the cardiac issues. Literally in a row as the summer and fall progressed.

In fact I am going into the hospital on Wed (12-9) for a procedure, followed by another one on the following Wed (12-16). Then there will be some recuperation of course. I have not so much as picked up a bottle of glue or much plastic in nearly the last year, so there is literally nothing to report on that front. As you would expect, me being a modeller, that doesn't mean I haven't bought a few kits and decals in the meantime!

I hope to feel rejuvenated enough in mid January or so to kickstart my hobby enthusiasm, and then channel that into the blog. So I hope to rejoin the blogosphere sometime in early 2016. So stay tuned; I hope you haven't seen the last of me yet!