I wanted to extend my wishes for a happy Thanksgiving for you and yours.

As some of you may have gathered, this has been a trying year here in the 72 Land asylum, but I would never want it said that I was unable to see the blessings that we undoubtedly have received. And most of those are related to my wife of 30 years Sue, my son Kenton, my daughter Shannon, and those two loons, Tug the pug and Tank the French bulldog. 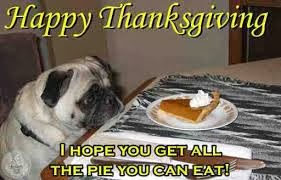 The photo is not of my pug, but it might as well be. I googled the image, and it was found on the site of Houston Pug Rescue. Here is a link. If you are feeling charitable this holiday season, there are worse options than donating to a dog rescue site, whether local or national.

A perfect storm of airbrushing disaster

Those of you who live in the Bahamas or the Gobi Desert can just sort of ignore this next bit. In the Great Northwest it has begun to get bloody cold. Highs in the low 40s, with some lows forecast for the first week of December in the low 20s (that's Fahrenheit of course, not Celsius). This does bear some relevance to last night's airbrushing session. It was somewhere in the low to mid 30s when I ventured out into the garage to get caught up on a couple of projects. At times like this I wish I had set up my paint area in some part of the house that actually gets heated. By the time I finally called the session off, my fingers were literally non-functional. I tend to be, shall we say, well insulated, so when I get that cold then it is time to find some hot chocolate and a fireplace.

In fact this airbrushing session started to show signs of becoming one of those perfect storms of disaster that make up the majority of my modelling efforts. First came a coat of Middle Stone camo on a Trumpeter Wellington. Being a great fan of Xtracolour paints, I have been hoarding my existing tins of the stuff, since it has become increasingly impossible to buy from the source (ie ,Hannants). Well, perhaps "buy" is the wrong word; they just can't ship it to you anymore.

So, whereas in earlier times I might have trashed a tin that had clearly exceeded its use-by date, I will now try to make an effort to salvage what remains in the crusty bottom of the container. So in went a little lacquer thinner and down it went into the airbrush cup.

But instead of liquefying (like it has done bazillions of times before) the paint turned into some unidentified substance with the external properties of grape jelly. And that certainly does not want to pass through the body of an airbrush. It literally gummed up the works. And of course I didn't realize that was the issue until it had literally worked its way into every internal crevice my Iwata has. I'm probably lucky it didn't back up into the compressor and muck that up as well.

Much frozen panic ensued. Try breaking down an airbrush when your fingers don't work. I still haven't gotten it entirely cleaned out, but after 20 minutes of work I was able to at least get some paint (a new load from an entirely different tin) moving through it again. I was able to complete the Middle Stone work, and even switched colors for some Ocean Grey camo on a recently constructed Hasegawa Hurricane. But that was enough drama for one evening.

Below is a shot of some recent work, including those two models (after the paint cured and the masking was stripped). Next up is getting the exhausts painted on the Wellington and sorting out the prop on the Hurricane. And I still need to get some replacement Satin for top coats of two mostly finished models. The other two models in the shot are a Revell P-47 and an Italeri SM-82. 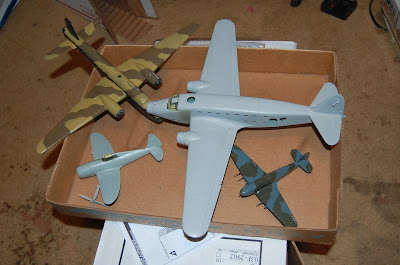 Posted by Kevin Callahan at 4:43 PM No comments:

Even on a production line as usually busy as the one at 72 Land, not all of the work is glamorous and visual. Most is general donkey work, like masking, attaching landing gear or buffing down a pebbly paint finish. And that has been the sort of thing I've been involved in for the last couple of days.

There has been landing gear to add to both a Hurricane and a Hawk. These are close enough to getting decals that, once I find myself some more satin for the final sealer coats, you should be seeing them displayed on the blog.

Some progress was also made in assembling a P-47 razorback. This is another in my long series of TBolt models, and will be in captured German markings. It is the one whose original nose art was "Beetle". The canopy is complete and major construction is done as well. Canopy masking is next.

The Wellington, B-36, Russian trainers, more Hurricanes, and the Italeri SM-82 are still in process. Also very early in the construction stage are a Ju-87 (desert snake!) and Mangusta helicopter. 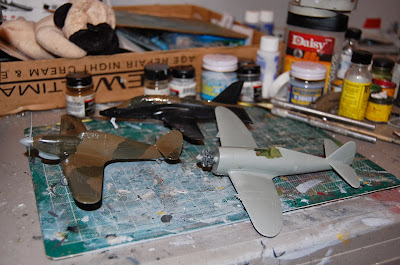 Posted by Kevin Callahan at 9:07 PM No comments:

I spent part of this evening blasting some live Rammstein out of my hobby room speakers and putting together a concentrated masking session. This was in preparation for a Dark Earth painting session. A Hurricane, a Hawk, a Wellington, and part of a B-36. Why would a B-36 need Dark Earth, you ask? All will be revealed...

In the meantime, here is a shot of the results of that painting session - Hawk, Hurricane, and Wellington, at least. 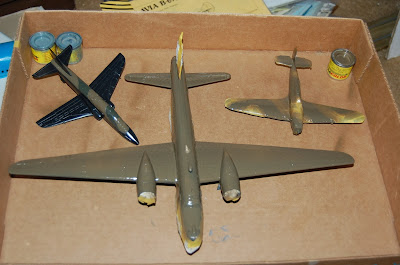 As I was preparing today's entry, I was amazed to find that the last model completed in the 72 Land production line was in May of 2013. So nearly half of this year has produced no completions. For some modellers, even one would be progress, but since I put 44 models into that category in 2012 (and 39 in 2011) this is a significant shortfall. But at least today I can consider another one complete.

It is the maligned Dragon/Cyberhobby Sea Vixen FAW1. I think most of the complaints center around the shape of the nose, with a few choice expletives saved for details in the cockpit. If either of those disturb you, Pavla has created replacement parts for the nose, cockpit, and ejection seat. Of course, given my rather dull-witted approach to modelling in general, it doesn't bother me at all, so I built the Sea Vixen as an out-of-box project.

The good news is that the new Cyberhobby kits, whatever you think about their accuracy, do not exhibit one of the prime problems with the first generation of Dragon 1:72 kits. Those kits (like the He-219, Ta-152, P-61, etc) looked great in the box but didn't fit. But this new generation has resolved most of the engineering details to produce kits that can at least be built and completed. Not that the build was faultless, but there is not much putty on this model. A bit of Mr Surfacer to get rid of a seam or two and that was it. I did seem to enjoy knocking a couple of very small strakes on the underside off at every opportunity, which kept the carpet monster occupied.

Markings were from the kit as well, if only because I didn't happen to have any aftermarket decals available to me. I chose the gauntlet markings from 899 Squadron, Royal Navy 1962. They performed very well, even the scads of no step markings across the spine of the aircraft. An accident with the satin topcoat meant it isn't as matte as usual, but the main purpose of an out-of-box build is to produce a finished model without massive expenditure of time, and this one did that well enough. The nose may not be 100% correct, but no one is going to confuse it with a Tiger Moth. 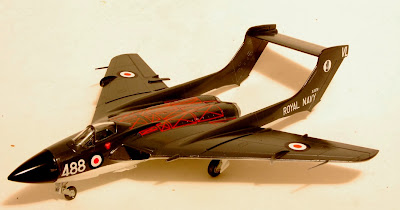 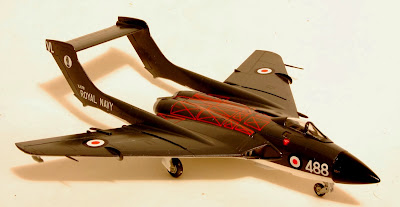 Painting of the green

Activities this week include adding another model to the front of the production queue. This is something I do far too often, and always long before enough models have exited out the other end. Somewhat similar to my eating habits I suppose (though that is surely more information than you are really looking for today).

If you have been following this blog for a while you'll know that I periodically add to my P-47 collection. Mostly this is because I enjoy P-47s, there are a number of modern kits (including the best of the lot, the Tamiya kit), and the type has a propensity for nose art. But this time the inspiration came from running across a decal sheet of the famous captured TBolt called "Beetle". The Germans got ahold of it and added their own national markings, gave it a yellow underside, but decided on a whim to leave the nose art. So hopefully we'll see that model progress over this winter.

On a different subject entirely, I currently have 4 Hurricanes in queue. Two, both Hasegawa kits, have gotten their Medium Sea Grey undersides masked off, and I spent some time tonight spraying the Dark Green uppers. I'll have to let them cure for a while before I decide if the coat is sufficient, or if they need some buffing and a resprayed surface coat. Also getting some Dark Green was the top fuselage of the Bomber Command commemorative Hawk from the airshow circuit a summer or two back.

Lastly, I had a bit of a disaster with a top matte coat that I was adding to the Sea Vixen, which will be debuting shortly on the blog. I've used Xtracolours for years, including their satin clear for use as a final sealer coat. Tonight I was having some trouble getting the cap off the plastic bottle - I have painted so little this summer that it had dried solid - and managed to smash the thin and brittle plastic of the bottle itself. So all my remaining satin clear ended up all over my painting workbench, amid some very colorful and inventive expletives. Luckily matte/satin is something that is available locally, since my mailorder access to Xtracolours has been stopped by the maleficent Royal Mail.

Here are a photo of the paint work from tonight's session. 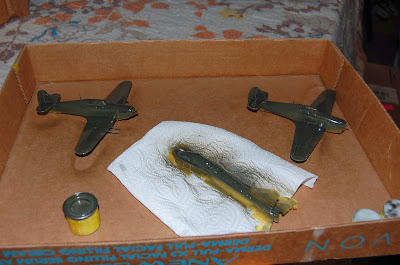 Posted by Kevin Callahan at 11:17 PM No comments: