Last Friday there were echoes of a sound not recently heard here in 72Land. It wasn't the thunder – though that was one spectacular lightning storm – it was the sound of a compressor. Something that hasn’t happened in nearly 5 months. I was able to work a small paint session in.

Of course it didn’t proceed painlessly, since I’m definitely a bit out of practice. It was a sort of greatest hits of painting problems. Insufficient thinning caused a bit of spattering from the airbrush tip. The water trap on the compressor seemed rather wonky as well, and resulted in a bit of water exploding through the airbrush. Thankfully, it *appears* that the splattering and water injection levelled out once the items had a chance to thoroughly cure, so a buff-and-repaint is probably not called for. But I will need to see what I can do to avoid a repeat at the next session.

Only three colors were used. I needed to get some White on the underside of one wing, both wing upper surfaces and the fuselage sides on the Finnish Hurricane in delivery markings. After it cured, I applied a series of circular white masks to the upper wings and fuselage. These will protect that White when I spray the Black (wing underside) and top camo colors.

The next was Dark Admiralty Grey to pick up some cockpit items that were missed in the latest Eurofighter (destined for RAF100 markings) and a newly started construction of a Tornado cockpit. This will eventually end up being the markings of one of the three specially painted Tornado retirement aircraft. I’ve already got the Xtradecal sheet that will support this.

Finally, I got the third and final upper camo color on the Ms-406.

It wasn’t a long session, or even an especially successful one, but it is one step on getting back on the production track. I’ve got 4 doctor appointments in 5 days this week, so it may be the weekend before I can get some other painting done. I certainly have a number of items in the paint queue. Primarily these will be cockpit painting for a MiG-29 and Su-24, along with Blue Angels Yellow wingtips on the A-4 and the lower surface coat of the Macchi Mc-205.

Here’s hoping I can keep the momentum going. 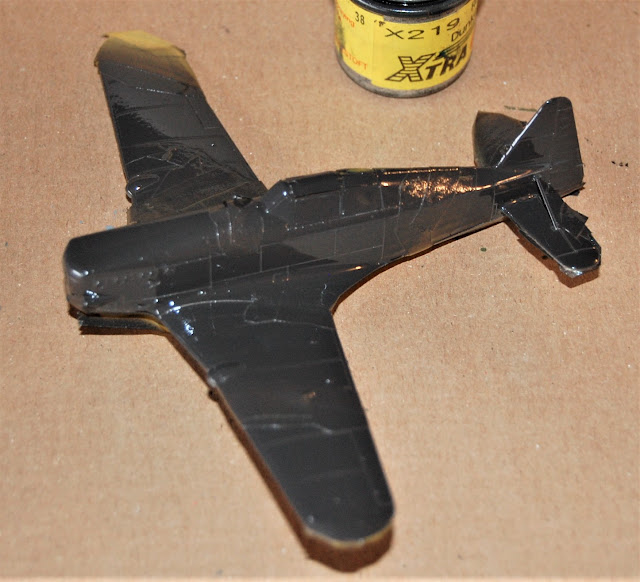 Posted by Kevin Callahan at 9:30 PM No comments:

Y’know, that almost looks like the completed cockpit of a Tornado GR4 to the right of the photo. Could it be that gremlins have snuck into the vast 72Land workshop complex and did some construction?

This is the Revell GR1 (which will have conversion parts from Freightdog to get it to a GR4), a less than new but reliable kit that is my personal go-to for the mud-mover variant. For an F3 I would use the Hasegawa kit. Although there is a surprising amount of parts for a 1:72 cockpit, fit is good and it didn’t take long to get everything together. Now it moves to the long paint queue for a coat of Dark Admiralty Grey and some detail painting.

This represents the first actual construction since early April!

Plus there is a Eurofighter in the box which needs a coat of DAG to the rear of the cockpit.

Posted by Kevin Callahan at 3:25 PM No comments:

Just because I haven’t been doing much construction or painting in the last 4 months, that doesn’t mean I haven’t been buying the occasional items. Big surprise. Since I haven’t been moving much in the way of models, most of my current spending is catching up on book series such as the spaces that I have in the Warpaint series collection.

Interestingly, when I owned The Supply Depot, we were (I believe) the first American retailer to import the early Warpaint books. They were pretty successful for the company, and I always regretted when other American retailers started bringing them in.

Out of roughly 120 titles, I believe I have about 95 and am gradually filling in the holes, mostly on the later titles. The latest one I picked up is #121 on the A-4 Skyhawk. The A-4 seems to be a popular type these days, given recent Modellers Datafile and Ginter Publishing releases.

This book is massive as Warpaint volumes go. It is 140 pages and perfect bound (most are just magazine style, though with heavier paper stock) and is roughly 1/4” thick.

Unlike some Warpaint books, the emphasis here is on the engineering of the variant series. That series’ strength, color sideviews of representative paint schemes, is rather lacking in this one. But for those who want as many photos as possible, this is dead on. You could probably do a book this size with sideviews alone, but the 10 pages at least have some interesting schemes.

Definitely recommended for A-4 fans, possibly for the engineers but with the occasional nod to the artist type.

BTW, western Washington is currently hosting a huge lightning/thunder storm. Nearly constant, with the occasional burst of extreme downpour. Almost like a midwest version. It sounds like the summer is winding down (which is ok by me; I'm not the high-summer type). Does cooler temp mean a return to active modelling. The Magic 8-Ball says "signs are favorable"... 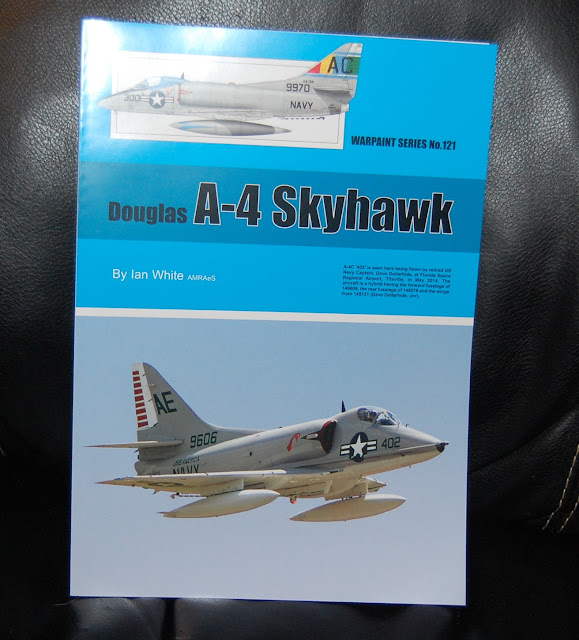