Feel free to browse the other items I have currently up for sale. This includes the firebomber version of the Siga Grumman Guardian. There are decals, conversions, kits, and even some armor. More items are being added periodically.


Posted by Kevin Callahan at 5:49 PM No comments:

Some of you know of my current employment state (as in un-) and subsequent financial state (as in dreadful) and therefore know that I have been selling some items on eBay to bring in a teeny bit of my missing income. But to date it has mostly been duplicate kits, superseded kits, off-scale kits (for my concentration on 1:72 at least), and historical oddballs. But last week I put one up that was a core part of my personal collection. And it really hurt to do so.

There are a number of grail kits in our hobby, and the Kendall / KMC Boeing 727 in 1:72 is one of them. When the kit was first issued, I was still operating The Supply Depot online store, and got a number of them to sell. It was a very ambitious kit, and not terribly cheap. I seem to remember the MSRP being around $70 in an age where even substantial kits were generally in the $30s and $40s. The main pieces were injected plastic and all the details were in KMC’s usual area of resin bits.

The kit did take some beatings for accuracy – nose? Engines? Can’t remember. And there was a persistent molding flaw on the rear dorsal fuselage that was going to make getting a good seam under the middle engine intake a challenge. But it was an airliner in 1:72 in injected plastic. The only precedents were the long out of production Aurora DC-9 and 737, neither of which were great kits either. Heller had improved the landscape with their 1:72 707, and that was probably the gold standard for large airliners at the time.

I never had any doubt that I would build my KMC 727. I already had the Heller 707 and Aurora 737 in the display case and expected to add the 727 in the fullness of time. But eventually economic reality kicked in and hard decisions had to be made. So why did I let it go?

First of all, there are now other 727s around in my scale. Welsh Models has recently produced one (though admittedly with the fuselage in vacuform, something I am not very comfortable with). Authentic Airliners has one coming along as well in resin, though I have heard the sticker shock on that one may be breathtaking. So it is not like I will never be able to replace that type in my lineup. Hell, there is even a 747 out there (the Anigrand resin, which has its own set of issues). And perhaps BPK will consider one if their first kit, the 737, wasn't a financial disaster.

Second, I have never been convinced that producing the landing gear in resin was a smart idea. I know that was KMC’s wheelhouse. But to quote others, resin is merely an extremely slow-moving liquid, and I felt there was no chance that a year or two of display wouldn’t produce two banana-shaped gear legs.

So, onto the block it went. Unfortunately there have been some payment problems with the sale, but I hope to have it cleared up next week. My creditors will be happy. 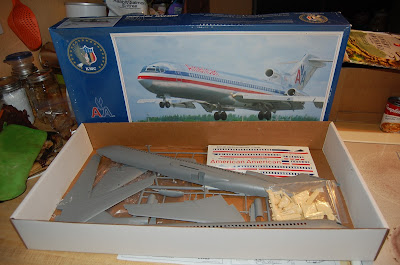 There is a bit of activity in the production queue to catch up with. The three Soviet trainers (Yak-130, MiG-AT, and Sukhoi Su-28) are finishing up with their major construction. The canopies are masked and attached to the airframe. Just a bit more seam work on the MiG-AT which has proven a singularly ill-fitting little monster, especially around the top of the intakes. It will be interesting to get a coat of white paint on the exterior to see what work still remains.

I have also gotten the major bits of the Trumpeter Ilyushin Il-28 assembled. In general I would have to say that it went together pretty well, though there are a couple of seams that will benefit from a bit of Mr Surfacer being run into them to eliminate them altogether. Paint schemes are pretty boring on this one; it is likely to be Polish in a NMF. 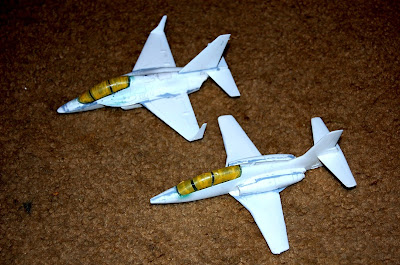 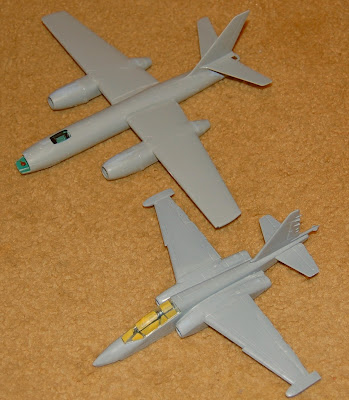 The Wellington and Sea Vixen have been waiting patiently in the paint queue for cooler weather. Which, I note with great excitement, seems finally to be arriving in Western WA. All but two of the next 10 days are forecast to be in the 70s!
Posted by Kevin Callahan at 8:54 AM No comments:

I’ve decided to put the sole Mk 2B trop in captured Japanese markings from a Rising Decals set I bought a few years back. The 2C trop will be going in desert RAF colors, with a presentation nose art from Sky Decals. One of the Hobbyboss kits will be getting Sea Hurricane 2C work; one of the types without a tailhook. Lastly, the other foreign air force getting some face time in the display cabinet will be a 2C from the Portugese Air Force.

Two of these are ready for exterior paint, while two still need their wheel wells and cockpits (such as they are in the HobbyBoss kits) painted in Grey-Green. As soon as the weather gets back to normal I am planning on spending some time in the paint room. 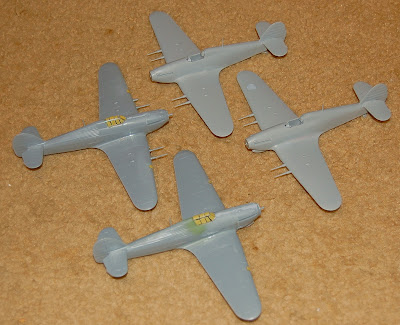 And as Jim mentioned in a comment on the 7-2-2013 posting, the Hobbyboss Hurricanes are rather anemic in the nasal dimension. You can see that in the nose-to-nose photo of the Hasegawa (left) and Hobbyboss (right). Not enough to get me particularly exercised, but something to note if detail accuracy is your primary interest. 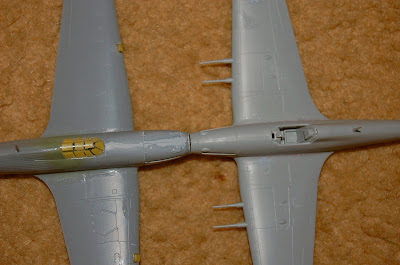 Posted by Kevin Callahan at 7:24 PM No comments:

No, the land of 72 has not split in half and sunk into the depths of Puget Sound. This is just the time of year that I have a hard time generating enthusiasm for anything that doesn’t involve a cold drink and shade.

If you live elsewhere than the US, you might not know that the western US has been undergoing a nasty spell of extremely hot weather for much of the summer. A recent high in Death Valley was 128, only 6 degrees away from the hottest temperature ever recorded on the planet in history. While Seattle is nowhere near that (obviously), we hit the mid-90s for a couple of days in July and there have been relatively few days in late June, July and August so far below 80. And before you Texans or Tunisians snort in derisive disgust, mid and upper 80s are enough to get the front page headline in any western Washington newspaper. Because we are so close to the coast, our heat tends to come with a good dose of humidity. Plus, we pale-skinned weather wimps just aren’t used to that kind of heat. Most houses are not air conditioned, including my own.

Add that to some problems related to my long unemployment, and it just hasn’t been a good time to spend time in the hotbox that is the hobby room, or garage that serves as my paint shed. But if I had to do it every day, it’d be work, right? I’m hoping to get back into the swing before too much longer. But then, there is only one day in the 10-day forecast below 80, so it may be September before full service is restored.

In the meantime, here is a shot of the queue that is backing up next to my workbench. 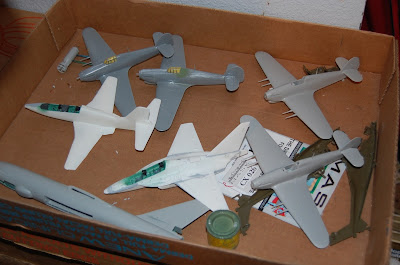 Posted by Kevin Callahan at 11:44 PM No comments: