Progress on the Valiant

I have managed to get the major fuselage pieces of the Valiant together. I did have one serious fit issue, which may be my own fault. There are a large number of structural pieces that need to be glued to one side of the fuselage before the other side is attached. The cockpit, nose gear bay, and something like 5 fuselage formers. All of them fit into rather chunky slots in the other side of the fuselage. The problem was that when I tried to get the two bits together, I could not eliminate a gap. Without the internal pieces, the fuselage halves fit together perfectly, so something has changed in the construction. Most likely, at least one or more of the structural pieces are fouling those big chunky tabs, and the cockpit is the most likely candidate.
Complications arise when you try to fix things. The nose portion of the kit is fairly well enclosed, which means you have almost no ability to see inside and determine where the plastic blockage is taking place. Basically you just try wiggling things prior to closing the fuselage and hope that everything lands where it is supposed to. After a long period of trial and error, the Captain Impatient portion of my rather damaged psyche kicked in and I just went for the best upper seam I could, figuring that I could apply putty to the lower seam where it was out of sight. Alas, while that was good tactics, it was poor strategy, since I then had to deal with indifferent fit of the bomb bay doors and the insert portion of the lower fuselage just aft of the gear bay. Looks like I have some PSR (putty-sand-repeat) sessions in my future.
I also spent time in the paint room and got some stalled projects moving again. The Attacker and Swift got their cockpits painted and their intakes assembled. The long-suffering Ju-88A4 got its RLM80 mottling done, though I’m not convinced that it is any improvement over the original job I did. Realistically, this sort of painting should have been delayed until I get a new compressor with a pressure valve so that I can crank the PSI down. But it was that Impatient guy again, so now I’m stuck with it. 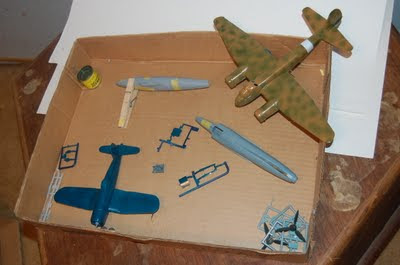 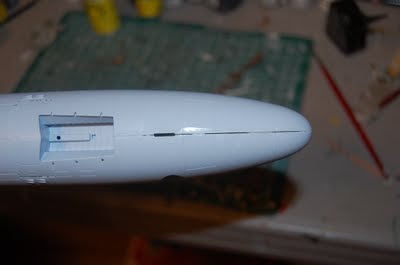 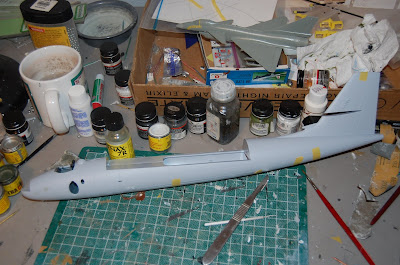 In other news, it looks like we’re actually going to have a football season this year. About damn time too.
Posted by Kevin Callahan at 11:32 AM No comments:

My copy of the new Airfix Valiant arrived on Friday afternoon. It is in a considerably larger box than the Canberras, and the sprues need the extra room. Everything at first glance seems very impressive, with the panel lines restrained and the detailing pretty decent for our scale. This kit is literally light-years away from the Mach 2 kit; trust me on that.
There are a number of options in the kit, allowing you to do more than one variant, including the PR version (though that is not covered by the decals in this boxing, I’ve heard that it will be released in a separate kit later this year). Variants catered to this time around are the BK1 (one used in the atomic bomb tests of Operation Grapple) and the Vickers Type 667 second prototype. No sign of a B2, and unless some aftermarket group wants to mold large portions of the wing and undercarriage bays, we likely won’t see one. Two of the decal options are overall white, one in Dark Green, MSG, and white, and one in overall NMF.
Parts options include an alternate tail, open or closed bomb bay with three different loads, two upper noses, two tail end caps, two canopies, and some antenna options. You also get the PR bits, but as I say you’ll have to get your own decals.
Some bits of this thing are manufactured like a Russian tractor, with gigantic slots and tabs that should be easy for even the most ham-fisted of us. But I’ve found nothing like that that will be seen on the finished model though, which is a relief. Decals look to be better produced than some kits in the Hornby age (I’m looking at you, Nimrod), even if you don’t opt for aftermarket sheets from Model Alliance/Airframe or Airdecal/Two Six.
Mine is already on the workbench, and I’ll give you progress reports as the thing progresses. I have the Airdecal 72014 sheet, and I’m leaning toward the BK1 from 90 Squadron at RAF Hennington in 1963.
Here are some quick photos I shot of the sprues so you can see what the kit consists of. From the Brit modellers that got the thing first I've heard that the fit is good and the kit builds easily, though there are some questions about the details on the gear doors.

Posted by Kevin Callahan at 10:43 PM No comments:

Just to prove that at least some modelling activity goes on around here in the summertime, I have finished another Hawk T1.
Once again this is the new-tool Airfix kit, and I have nothing but praise for its engineering and buildability. No filler was needed anywhere, the seams were easy to deal with, and detail is fully adequate for this scale. My error was carried over from the previous Hawk (since they were assembled and mostly painted in tandem): the mid-canopy sealer should be a light beige rather than a full-on brown.
The decals were taken this time from Xtradecal sheet 72-095. It is for a 63 Squadron aircraft at RAF Chivenor in 1991. Interestingly, these markings also feature on Xtradecal 72-031. I’m not sure what the difference is, if any, because in fact there are a number of markings on both sheets.
This is completed aircraft #359, finished in July of 2011.
I should also note that my Airfix Valiant is on the way from the good folks at Sprue Bros, and due to arrive on Friday afternoon, 7-15.
Posted by Kevin Callahan at 6:57 PM No comments:

Faster than a Valiant

What is faster than a speeding bullet? Apparently, the availability of the Airfix Valiant at Europe’s largest model retailer.
Hannants received their first shipment of Valiants on the morning of Friday, 7-1, and a few hours later they were sold out. Hours. Now, in Hannants’ defense, they were shorted by Airfix themselves on their initial order. But it is clear that the demand was underestimated  by Airfix, at least for the opening surge.
We shouldn’t be surprised. We of the 72nd persuasion have been told for many years now that “1:72 doesn’t sell”. I was told that many a time when I owned The Supply Depot, a pioneering online retailer in the 90s, and I still hear it today. And given that are really no reliable sales figure for the industry, it’s not something we can prove or disprove. But keep a long term eye on the Hannants top ten sellers (admittedly an unaudited source) and see the ratio of 1:72 and larger scale kits/accessories/decals that appear on the list.
Perhaps Airfix was gun-shy due to rumored lackluster sales of the Nimrod. But this is a major release of the last British Cold War bomber, which completes the set along with the Vulcan and Victor. And unless one counts the Mach 2 kit, it hasn’t been done in long-run injected plastic before now. Given that Airfix prices are generally quite reasonable, they should have expected brisk sales, certainly when the kit had the “new” cachet and buzz.
There was a story floating around that Airfix shipped to their foreign distributors at the same time that they shipped to their British ones. So there may be an unknown number of Valiants currently cruising the Atlantic toward North America. When I asked Sprue Bros, about a week ago, they had not yet received notice that theirs were on the way.
The Valiant was one of the few “buy-on-sighting” kits that I have for 2011 (the other being the Revell Halifax). But it looks like my onboard impatience engine will need to cool off for a while longer yet.
Posted by Kevin Callahan at 6:30 PM No comments: