The completed model for the day is part of the Lockheed twins series, the PV-1 Ventura. This is one of the military adaptations for types that were primarily commercial. The Academy kit has been around for a number of years now, and is not to difficult to get together. While building it, I was affected by one of my periodic bouts of modelling impatience, and didn’t take adequate time to fair in the canopy or do a proper amount of masking for some of the other transparencies. Not sure why this seems to strike on occasion, but then my list of psychological damage relating to modelling is fairly long (fear of airbrushes, disinclination to start on a task I don’t like such as vacform canopies, inability to let things dry, etc).

This being a military variant, the option for a commercial marking scheme was not available. I’m not a huge fan of the three-color naval scheme and couldn’t find any decals for an all-GSB type. I did have the Zotz sheet for Venturas, with all sorts of interesting – though small – art, but finally settled on an old Carpena sheet that had a Free French example. In fact, I ended up selling the Zotz sheet on ebay. The French aircraft also had the virtue of being a single color (add laziness to my list of psychological symptoms). I had just finished a book on the problems between DeGaulle and the other Allied leaders in WW2, so the timing seemed right.

In the past I have had issues with the adhesive on Carpena sets, but these markings went on well. The antenna wires are Wonder Wire (the ceramic wire that I sadly seem to have run out of now) and were attached with white glue. A matte overcoat and some unmasking of canopies and another one went into the books.

When I committed to the 72 Land blog, one of the founding principles was that I would show whatever I finished, even if it wasn’t great work. Like many modellers, I find that the quality of some of the models produced in magazines and online can be pretty intimidating, so my aim was to show that even Profoundly Average work can be displayed with confidence. I like to think that I can produce something nice on occasion, but not everything is a contest winner, and the Ventura definitely falls into that category. Still, it will fit in well with the lineup of Electras, Lodestars, Harpoons, and other Lockheed twins. 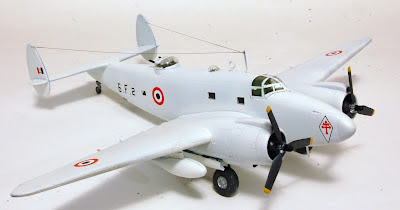