Another Lockheed twin joins the family today. This is the model 10 Electra. It shares the same engines as the Electra Junior, but the fuselage is slightly larger. The first flight occurred in February of 1934, and this was the model that Amelia Earhart was flying when she disappeared on the world circling flight in 1937.

The kit is mid-period Special Hobby, which means a vac canopy and resin engines. Fit was decent, though it did need some adjustment and filler for the seams. I left the fuselage windows for last and filled them with Kristal Kleer after the sealer coat.

Given my unsatisfactory results on the NMF P-47 some time back, primarily related to a non-consistent primer coat, I gave some thought to how I wanted to paint the model. There are patches of essentially Gloss Sea Blue on engine nacelles, nose, and flying surfaces. So I decided that, rather than try to mask those places and risk overspray, I would cover the entire model with a coat of GSB, then mask off the relevant portions and spray the Alclad. Even if I had painting troubles, at least it wouldn’t be caused by the undercoat. It worked out fairly well, though I still haven’t found any newer bottles of Alclad that want to work for me. This model, which is fairly small, took nearly an entire bottle of Airframe Aluminum to cover. The ongoing Alclad saga continues. Believe me, I wouldn’t persist except that I think that their NMF is the best in the business – when it works, at least.

The decals were from Draw Decals, using their “Digital Silk” format. The sheet has overall carrier film and the markings are very thin. They depict a Northwest Airlines in its 1940 colors. I did have one little instance of lack of adhesion. When I sprayed the sealer coat, the starboard fuselage flash actually pulled from the surface and started flapping around! A quick attempt to lay it back down and coat it with some Aero Set (being very careful not to let the setting solution touch the paint, since it can react with it) and panic was averted. I’ve always like Draw, since they make efforts to provide civil markings in 1:72 for what would otherwise be routine military models. I’ve got an eye on their Super Electra and Lodestar sheets for the future. 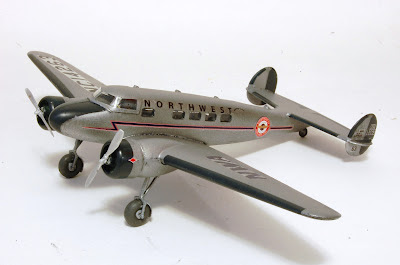 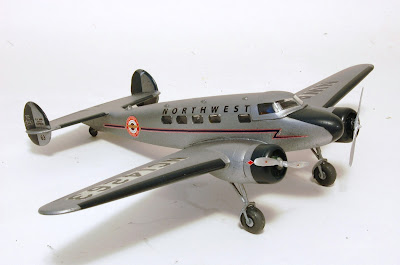 Posted by Kevin Callahan at 7:30 PM