The fall modelling season is here

It appears that real fall weather is about to descend on the Pacific Northwest. Weather.com is even hinting at a “severe weather watch” for the weekend. This actually is news because we have had an almost unprecedented 90 days of no measurable rainfall. But the important thing about the return of endless rain and 50 degrees temps is that it graphically indicates that the fall modelling season is upon us.

And it is about time. Due to various distractions, I’ve been a very indifferent modeller this summer. Nothing has actually been completed since the first week of July. I’ve barely done anything modelling related at all. But this week I began working my way back in.

The navalized P-51 (F1J1) Mustang is all painted, the gear and prop are attached, and only the landing gear doors need to be added before decaling. I’ve found a unused scheme on an old SuperScale F4U1 sheet that I’ll be using. 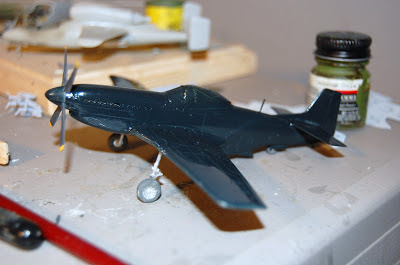 Plus I spent some time in the paint room. As the picture will show, I masked and painted the Red on the P-52 (whif F4U1) cowl ring and tail. I repainted the underside of the F4J Fury after adding some weapons pylons and refueling probe. And I continued my apparent underside fascination by painting the lower surfaces of the whif Go-229 that will be in USAF markings. All in all, not a bad session, with a minimum of moments that would require me to bellow obscenities out into the neighborhood through the open garage door. 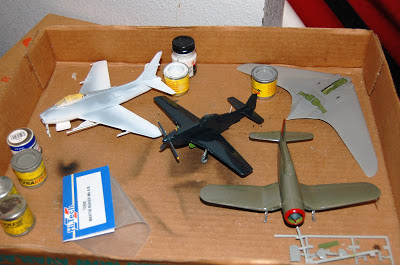 Posted by Kevin Callahan at 4:39 PM