A glimmer of hope?

I must say that that was an interesting airbrush session. Not that all of my problems have been solved, but there does seem to be a glimmer of hope in the process tonight.

Previously on the 72 Land airbrush battle: As you will know from the earlier issue of this blog, I have been having significant airbrush problems. The paint just does not seem to want to push through the brush. At times the paint flow is absolute zero, even though air is still coming out. A blockage? Pressure leak?

After some research on the net, I realized that over the course of the Iwata's tenure (something like 10 years now) it had lost the o-ring that sits in the nose between the tip and the body. Apparently these things don't stand up well to lacquer thinner, which I use due to the quicker curing time for enamel paint. Could that have been causing the issues? Getting a new one was worth a try.

A couple of days back I received a new o-ring from TCP Global, a supplier of airbrush parts. The o-ring is a tiny bit, and the shipping was more than the part, but I was desperate. The first time I installed it and tightened down the tip, it seemed larger than it should have been, and actually deformed itself - a tiny loop extended past the airbrush. Much consternation ensued. Eventually I got it to the point that the loop was minimized. Nothing is easy, it seems.

I proceeded to the acid test, an actual painting session. I still didn't have a decent coverage of Alclad on the NMF of both the Il-28 and the B-26, so I started there. At first things looked better; paint was actually coming out of the front visibly. I think I got the Il-28 to a point I can live with, but things started to collapse as I worked the B-26. The paint stopped flowing and bubbles were rampant in the paint cup. On a completely different level, I decided that the surface prep I had done on the B-26 was entirely inadequate, and no matter how much Alclad was on the surface it wasn't going to look good enough. A complete repriming and more surface prep were required.

But that didn't explain the state of the brush. I broke it down and fiddled with it. Even when I filled it with pure thinner, it bubbled like the fumaroles at Yellowstone. More stripping, more sticking toothpicks into various orifices (man, what kind of traffic am going to get via Google with that line?) I decided to try again with a non-metallic paint. This time I decided on the RLM79 upper coat on the Ju-87 desert snake and more Dark Green on the world's largest whif.

And after a slow and rocky start, it finally began to work. Coverage was slow and at some points pencil thin - why couldn't I have been doing Luftwaffe mottling while this was going on? - but paint was being applied. After probably 40 minutes of continuous spraying, the areas of Dark Green were opaque enough to call it a day.

Since the airbrush has been down a couple of weeks, I have a fair amount of paint work backed up in the queue. Later in the weekend I will try it all again and see what I can come up with. 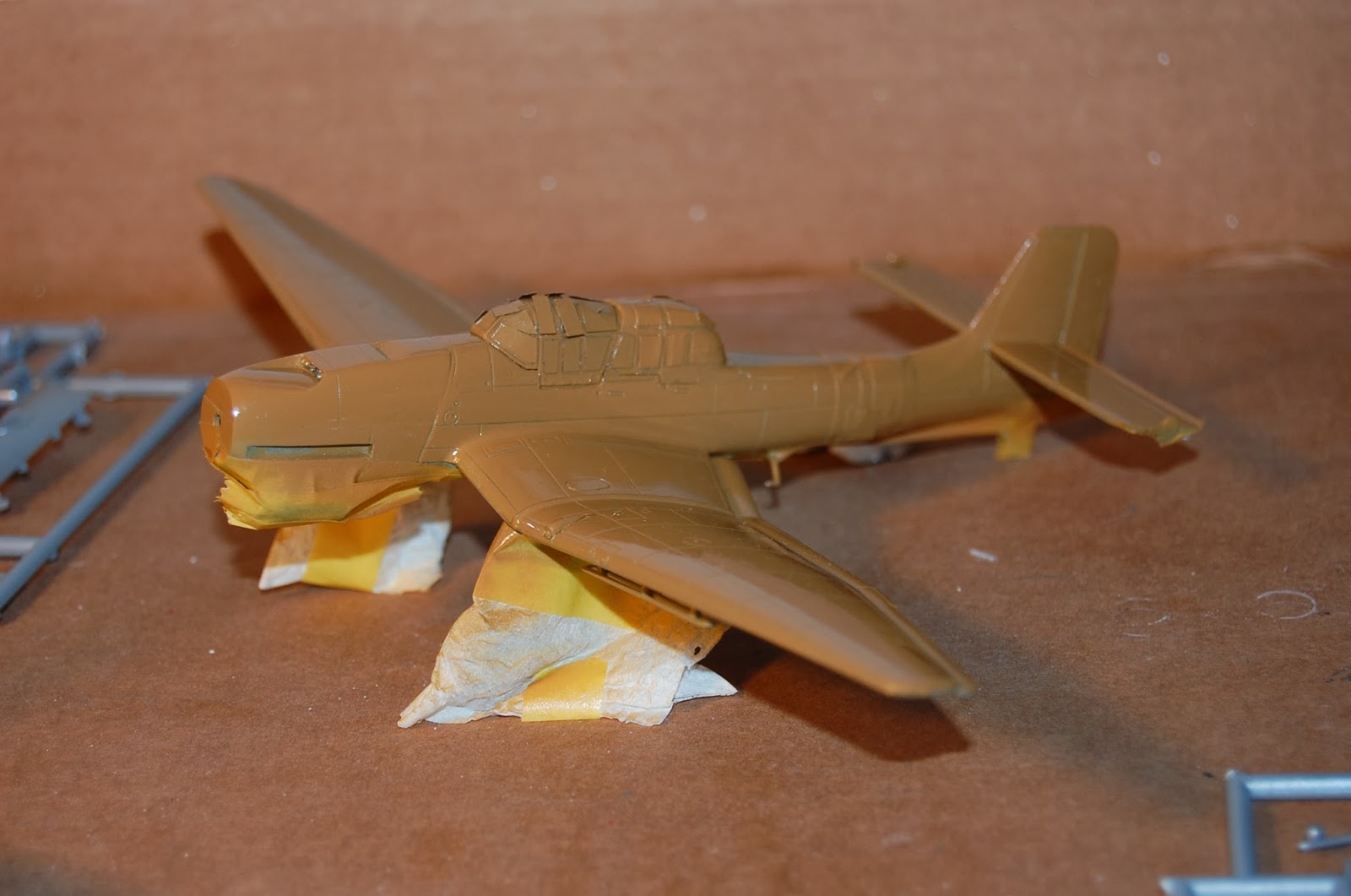 Posted by Kevin Callahan at 8:29 PM