Now this little beastie was something of a struggle. Not that the kit is bad, though Roden is well known for having some of the tiniest parts in all of the modelling kingdom. But I seem to have been abnormally ham-fisted in handling it. While trying to straighten a slight misalignment in the two wings, I gave it a bit too much pressure and managed to snap some of the struts. The repairs were done on the upper end of the struts, so they are hidden a bit by being on the underside of the top wing.
Being a two bay biplane, there were a lot of rigging lines to be laid. That’s always a bit of a crapshoot, and I can certainly understand why modelers who are not committed to biplanes would shiver a bit when confronted with the process. The system I have works pretty well, for me at least, though I'm not sure the product I’m using is being made anymore. It is called Wonder Wire, and is a ceramic wire that had been ordered from (I believe) Roseplane aka Rosemont Hobbies in the late 90s. Being ceramic, it does not bend happily, so there is no problem with sagging or losing tautness between attachment points. Being a wire, it is wonderfully thin.
The process is easy: use a set of calipers to measure the distance to be spanned, break the wire with a sharp scalpel (while keeping the wire taped to a back board so that it won’t disappear into the carpet monster when it breaks), dip both ends into white glue or Kristal Kleer, and carefully apply it to the model. I don’t deal with turnbuckles in 1:72 scale (good lord, I can barely remain sane doing it the way I do), and at an appropriate standoff distance it looks just fine. Alas, Roseplane Hobbies is no more, and I don’t know of any other manufacturer who has picked up the product. I have one bag left of the stuff, and once I run out I’m not sure what I’m going to do. I can’t see myself using monofilament, which needs superglue to work. I can hardly get that stuff to do what I want it to when I’m dealing with large resin pieces, let alone a microscopic attachment point like would be needed in this case. Maybe I’d better do all the biplanes I want to do now.
Here is some supplemental information I just found on a Google-hunt. I found an old forum posting from Hawkeye Hobbies from early 2010 saying that Wonder Wire was still available from Precision Enterprises, PO Box 97, Springfield VT 05156. $7.95 for a 10-foot length, postage $2.50 for up to five packages. I think I’ll send a note over there and see what happens.
The decals are another option off of the Model Alliance Wings of Silver sheets, in this case 72156: Wings of Silver Part 1. The Snipe is from 19 Squadron RAF, based at Duxford in 1924. No squadron bands on the upper wing, but an interesting diagonal blue-line marking along both fuselage sides. As always these decals performed flawlessly. I’ve mined these sheets pretty regularly; 4 completed models from them, 1 awaiting decals, and another waiting to start construction.
This is completed model #350, finished in March of 2011. 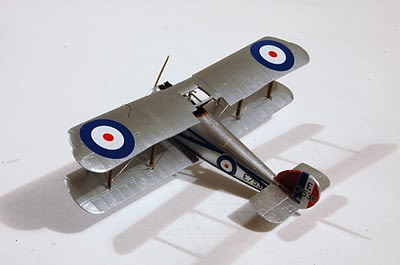 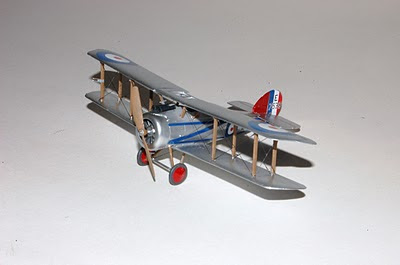 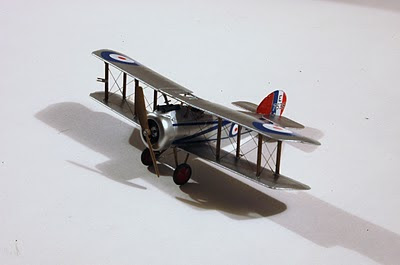 Posted by Kevin Callahan at 7:59 PM