I have to apologize for the lack of activity on this blog for the last couple of weeks. I went through a period of post-show burnout coupled with the advent of actual Spring here in the Northwest. Almost a week of no clouds, and at least one day over 70! Hey, you take what you can get here in the Rain City.
I did do some construction on the Trumpeter J-10 and Italeri F-22. But as usual my main hangup was the paint shop. I don’t know what deep psychological scars the painting of models stirs up with me. Well, yes I do – it’s where I usually screw the model up. In any case, it can keep me out of that phase of model production for long stretches. I have something like 7 or 8 models in queue right now for some sort of paint work.
But I forced myself in there tonight to paint the surface coat on the Hasegawa Ju-88 undersides, the detail Gelb patches on the Airfix Bf-110E, the prop on a Hasegawa Ki-44 (which apparently inspired Sword to announce a new-tool Ki-44 since I’ve nearly completed the ancient Hase one), and the cockpit on the Zvezda T-50. Small jobs all, but you still need to clean the airbrush out between colors, so it is significant work.
Right before I dropped from sight, I had finished another Revell Eurofighter single seater. This is part of a long term project to do all the RAF squadrons that are flying the type. The 3, 17, and 29 Squadron models are complete (in that order). 6 Squadron decals are on the way from Hannants along with another single seater. 11 Squadron will finish the series, at least until they move another group into active service. There is a standalone flight (1435?) also, but since they don’t use squadron bars they are low on my priority ladder. Here is a group photo. Somewhere I have an elderly Airfix model in prototype colors done as well, but I didn’t bother to pull it out for these shots.

I’ve built enough of these Revell Eurofighters at this point that I can move pretty quickly through the construction process. Other than having a lot of parts for a jet this size, there aren’t any big traps awaiting the unwary. Both the RAF site and Airliners.net have plenty of photos. And then it is just the painting sequence. My main bonehead move in this was reversing the colors on the main gear doors. D’oh! See why I love painting (and in this case repainting) so much?
This is completed model #351, finished in March of 2011. 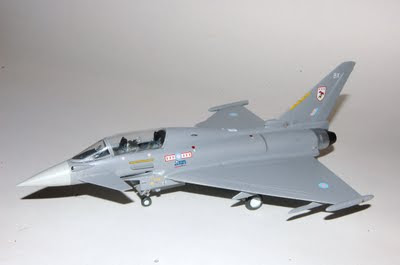