As I’ve mentioned before in this blog, my main interest in 1:72 modelling is the exterior of the model: the colors and markings. Thus, there are a few types – not many – that I have done in series. Not all at once, but I tend to come back to them time and again with as many unusual paint schemes or markings options as I can find decals for. Hurricanes, P-47s (all that nose art), A-4s, Tornados, Eurofighters, Spitfires, even (to a limited extent) Bf-109s. Being a confirmed RAFophile, BAe Hawks also fall into this category. I’ve completed 9 up to this point, and with the advent of the excellent new T1 and T2 kits from Airfix, I suspect that there are many more in my future.
I have two on the workbench right now. The first has just been finished, though the second is still taking its trips to the paint shop since the color scheme is a bit more complicated. This one is in fact the Italeri Hawk, the Red Arrows boxing with its exasperating red plastic. That stuff is a devil to cover with paint, especially white.
I probably wouldn’t have used it at all, given the new Airfix kit, but the decal set I wanted to use was obviously sized specifically for it. It is the famous Roundel Hawk, which was the 2008 display aircraft from RAF Valley. It came from 208 Squadron. The large roundel on the underside lies astride the wheel wells. The wells are a slightly different shape and location on the new Airfix kit. The decals weren’t going to work on that kit, hence the use of the Italeri kit.
The Italeri kit has an adequate interior, nothing special, and the fit is a bit more suspect. Still, I made it through the construction phase with few issues. The overall color scheme of Black is delightedly simple, though I don’t think I like the brown I used for the internal sealant between the cockpit sections. I think it should closer to a cream or doped linen color. Something to remember for the next set of Hawks.
The decals came from Xtradecal 72085. Also on the sheet are a Red Arrows example, and the Hawk in WW2 camo from a couple of summers back, for the 70th anniversary of the Spitfire. The decals are applied in two layers: a white background and the colored decal itself. The white decals are starkly opaque, and not a hint of black made it through. I applied decal solvent to them and let them dry overnight to make sure there was no movement when I put on the second layer. The colored decals went on like a dream and got another coat of solvent. My one note of caution here is that the underside large roundel doesn’t play well with the flap retractor fairings, and unless you measure and cut the decal ahead of time, you will likely be doing some touch-up painting. Otherwise it matched the gear doors quite well.
After the decals were on and they received the customary semigloss overall coat, the masking was removed and the canopies got a polish with WD40 on a Q-tip.
This is completed model #358, finished in June of 2011. 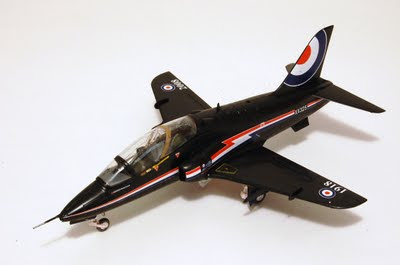 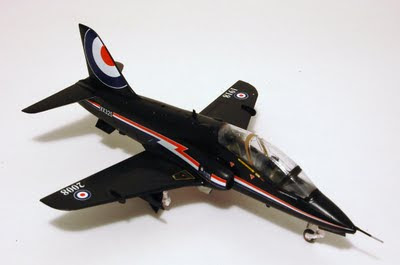 Posted by Kevin Callahan at 8:43 PM