There was a period where Hasegawa was stretching their muscles a bit with modern aircraft in 1:72, which produced fine kits of the Tornado and F-111 (and, yes, all those F-4s). The F-111 was especially interesting, because they went to the trouble to engineer the kit with flaps and slats extended. The plane goes through some gyrations to get to that mode, including a couple of moving panels that clear the front of the wing glove for the fully extended wings. And since the hidden areas of flaps and slats are painted in red (and the SEA camo is four colors) and the gear are a different color as well, it makes for a complex masking job to accommodate all these colors.
In fact, the model ends up looking like a mummy, as you’ll have seen from earlier in-progress shots on the blog. I was finally able to unwrap the thing last week, and was generally pleased with the job. There were a few spots that needed touch-up, and some of the camo masking was a little clumsy, but nothing I considered reworking. There was still a laundry list of detail bits to add (those wing gloves, the exhaust cans, the slats, a nose probe) after the decals went on. But I still give it thumbs up for being a well-engineered, nicely detailed kit of an important aircraft. I do believe it will be my last F-111, however, unless I decide to use my Esoteric resin nose and do an F-111B.
I used the kit decals, not having any F-111 markings in the stash (only a Modeldecal sheet of EF-111s). I would have chosen this plane in any case. It is the Bicentennial aircraft of the 20th Tactical Fighter Wing called “Spirit of 76”. I almost always go for special markings if I have the option, and since I lived through the Bicentennial celebrations in 1976 I saw this plane in many of the publications of the day. Hasegawa decals have a weird quirk: the whites seem to always be printed as a cream colour, or maybe they just yellow really quickly. In any case, you can see that in the pictures. It was a long project, but a good addition to the special markings lineup.
This is completed model #357, finished in May of 2011. 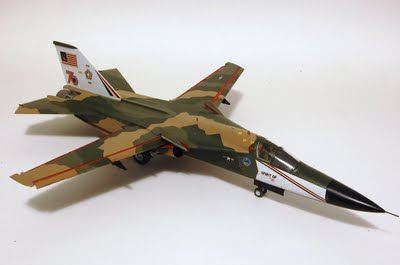 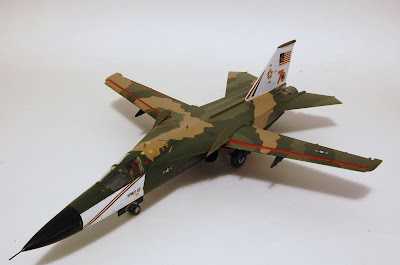 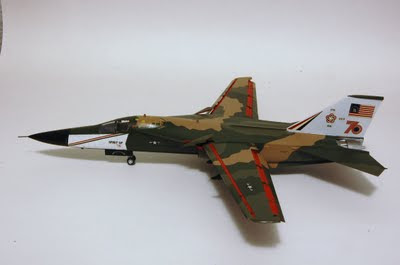