I stared grimly at the malevolent little blue bastard that lurked like a diseased toad on the surface of my workbench. No words were exchanged; things had long since gone past that point. Within seconds the thing was making a horrendous racket, and I advanced toward it, consumed with fear and anger.

And then I started airbrushing.

You have to remember that this airbrush and I have a classic love-hate relationship. I will not brush paint exterior surfaces, because the best quality is less than a decent spray job. It wouldn't take much of an online search to verify that opinion. Some modellers can produce decent results with the hairy stick; I can not. So for better or worse, I have had to learn airbrushing technique.

In the early days, my problem was that I was not thinning the paint enough and was getting lots of orange peel surfaces. Some helpful advice from fellow IPMS Seattle member Andrew Birkbeck got me past that issue, but there have been others to replace it. They seem to revolve around mechanical and cleaning problems. I had a tiny o-ring dissolve in the airbrush nose without even knowing it, which caused a loss of pressure and subsequent lack of paint flow. It also is very hard to clean the deep internals of a dual action internal mix Iwata, and dry paint buildup was giving me grief as well. I sent it down to Iwata in Portland for a few weeks a number of years ago, and the problem was temporarily solved by a good cleaning and refurbishment. But like most problems in this hobby, it gradually returned.

So it was with some trepidation that I approached tonight's session. But I am delighted to announce that things went pretty well. Despite using paints that needed a long stirring (since I have not used them in 18 months) the brush seemed to be pushing paint through. There was only one model - that AS-6 Kingfish - that might need a little buffing and reshooting with a surface coat due to some pooling. But painting the white bits (wheel wells, intakes, main landing gear and doors) on the two Eurofighters and the XB-47 went just fine. Emboldened, I moved on to reshoot the fixed gear on my desert snake Ju-87 that I had masked earlier in the evening. I was also able to get a coat of dark green on the AS-6 and the mottling on the landing gear of the aforementioned Stuka. The last color was a coat of Sky on the lower surfaces of two early Tamiya Spitfires that have been sitting around my construction bench for literally years.

I was not able to complete all the items in the queue, but I decided to use a famous military strategic concept: declare victory and get the hell out. Later in the week I'll do some spraying on the Huma P-1106, a repair job on a Hasegawa B-26, the Lockheed D-21 drone, and (once I mask off the upper surfaces) I can make some progress on the world's largest what-if project.

So far I have to count this session as a win. 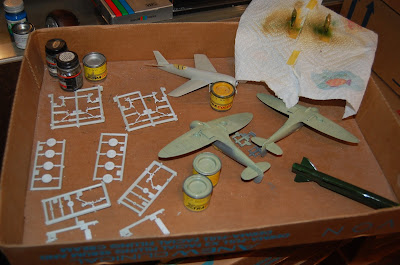 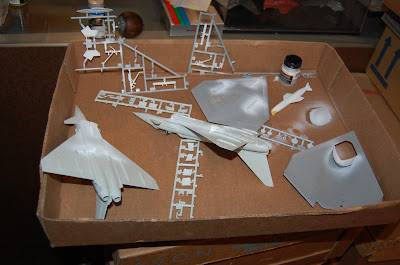 Posted by Kevin Callahan at 8:41 PM