Next in the completed stack is the recent Airfix Messerschmitt Me-110E. I have heard the kit maligned for its panel lines and its undersized vertical tail surfaces. The panel lines are a bit deep and wide, but for anyone who has dealt with the Matchbox trench-digger of old they can be successfully ignored. As to the tail surfaces, I’ve heard that the fix is a five thou shim of plastic around the outside rim of the tail. Five thou? That’s not much. And given the serious pig-butt I would make of the job of sanding down the strip of plastic, I have to respectfully decline.
In terms of buildability, a much more important yardstick to me personally, the kit comes across pretty well. The parts fight tightly and require no filler. Their method of adding the nose guns has some issues, and even being careful I managed to bend one of the barrels to where it would not go through the assigned hole. Out came the .25 plastic rod and I was past that problem. You do have some options – bigger sand tires, extended tail, different noses.
I very often will find myself an aftermarket decal sheet to use, especially since it gives the model a little personal touch. But since the kit markings included a North Africa version – always the choice if I have the option – I decided to stick with that. I earlier mentioned my concern with the extreme matte surface of the decals. I followed the plan I outlined, using an old Microscale sheet.
This is completed model #353, finished in May of 2011. 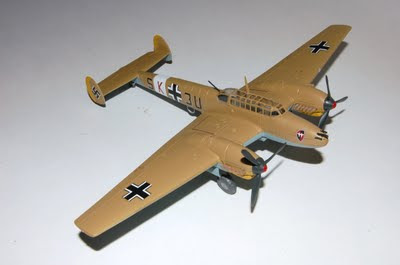 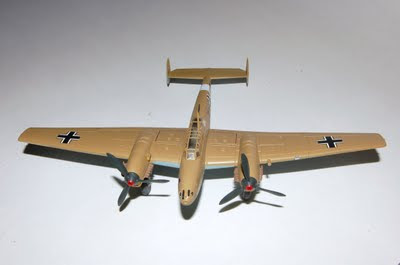 I’m in the process of assessing the damage from yesterday’s paint session. I think the Ju-88 will be fine after the required buffing. The F-111 will take some careful work, given that so many of the painted areas are in areas difficult to take the sandpaper to. The white wheel wells were just a botch, and will need to be repainted, this time with paint that has more than the thickness (and covering ability) of skim milk. 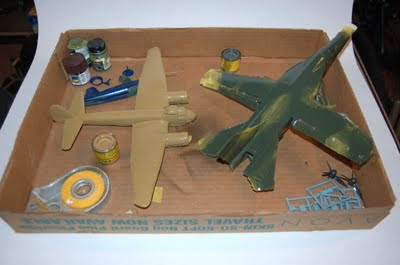 Posted by Kevin Callahan at 9:19 PM