This model has actually been 99.9% complete for weeks now, but was waiting for a key part to arrive and be painted. When I was masking the front windscreen, I managed to crack the thing and then misplace one half of it. So I wrote to Stevens Intl, begging for a new clear sprue to replace it. After a couple of weeks (and a check for $10) I had my replacement. Thus endeth the story of the convertible Lightning. Imagine what your hair would look like after an hour’s drive in that…
The markings came from a Cutting Edge sheet that came out shortly before Dave Klaus scuttled the operation. Paint was of course Alclad (White Aluminum) and since I was going to have the cockpit closed – once I got all the necessary parts – I didn’t bother to upgrade the ejection seat or add etched seatbelts. As anyone who has read this blog knows, my main interest is in colors and markings in any case. And the 11 Squadron markings look good. As it happens, the next Eurofighter Typhoon T2 in queue is in 11 Sq markings as well. I can’t recall offhand if I have any other models that use the black/yellow squadron bars.
Although the Trumpeter kit has some issues, most noticeably the not terribly delicate treatment of the tail end (the big fuselage dip between the two exhaust cans), it is miles ahead of the aged Airfix raised line and stick landing gear kit that we’ve all been using for so long. In fact I think I built about 4 or 5 of the old kits, including a P1 conversion from Aeroclub, back in the day. They were the dictionary definition of chunky. But they were what we had at the time. I still wish that someone would do a modern version of the trainer variants. There are a couple of color schemes that can only be applied to a T4/T5.
This is completed model #354, finished in May of 2011. 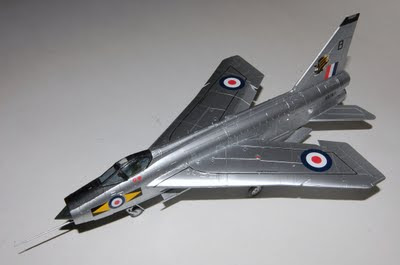 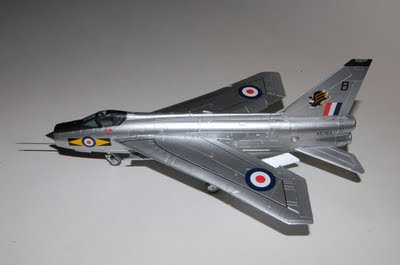 Posted by Kevin Callahan at 4:53 PM