It has been a while since I’ve been able to declare a model finished, so it is with some relief that I have so designated the following. This is the DML He-162, which embodies all of those things that are constantly repeated about DML kits around the IPMS modelling rooms before the meeting starts. It is very well detailed and doesn’t fit very well at all. Making matters worse, I suppose, was that I didn’t extend myself on this one, and so it is remarkably unexceptional, even for me. Still, it is one more model in the display cabinet, and more for the Luft46 shelf. True, this one “existed” in more than a paper form, but I think xit still belongs in that category.

The earlier DML 1:72 kits look wonderful in the box, and only show their fangs when you actually start gluing them together. So, to many in this hobby, they might well be the perfect kits! But since I actually built the thing, there were some problems. I didn’t use most of the small photoetched fret, since I didn’t open the engine compartment to display the jet engine nor open the cockpit, and that is where most of the metal pieces reside. DML requires that you physically cut the main gear doors apart, which I made a bit of a pig’s ear of. The nose probe is attached to the fuselage part on the sprue, which means it survived about 30 seconds into construction. The rear engine covers don’t fit worth a damn, and I foolishly waited until after painting to attach them, and damaged the paint job. Thankfully the paint scheme is simple and the decals few.

Having said all that, I am still determined to make my way through all of the old DML kits. They are, after all, rather interesting subjects, and can be built (if only I can curb my impatience a bit). The Ar-234 is mostly painted, the Me P-1101 is in sight, the Su-24 is under consideration, which would leave only the He-219 as a graduate exercise. Maybe if I delay long enough, Revell will use the data from their 1:32 model to create 1:72 molds of this interesting twin-engined creature. Although there are no doubt lots of DML kits in attics around the world, I suspect the bad word of mouth would mean that a lot of modellers would buy a new He-219 kit with a profound sense of relief. 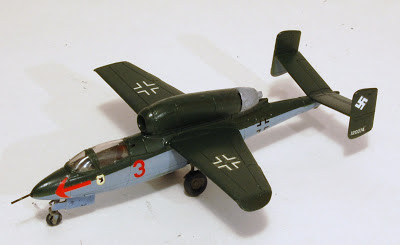 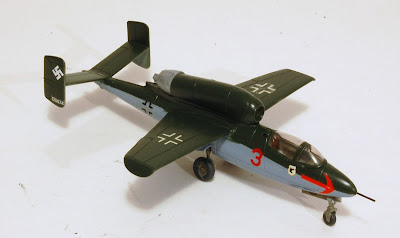