A bit of Hawk construction

Most of the activity this week has been in construction. I decided to move ahead with my last Italeri Hawk T1 (I think I still have a T2 as well) so that I could use a particular Xtradecal decal sheet: 72085. This is the “roundel Hawk” that I’m pretty sure was sized for the Italeri kit, since the Airfix new-tooled version was not available when the sheet first came out.
But while I was at it, I realized I had another Airfix new-tool T1 in the stash. So I decided to build them in tandem. Still haven’t quite decided on the markings, though the 208 Squadron (yellow and blue squadron bars) on Model Alliance 72105 is a frontrunner. But then, I have to say that I like the black-tailed 63 Squadron example on Xtradecal 72031 (with the big axe in a yellow circle and yellow/black checks as squadron bars). Then again, I might go all retro and do the 79 Squadron grey-and-green camo (with red arrowheads on a white field as squadron bars) on Xtradecal 72095. So many Hawks, so little time.
Just to keep my modelling credibility up, I had to do some work on a Third Reich type. This was the recent Airfix Bf-110E. It is all built and painted, and I’m currently applying decals. I had decided to use the kit markings, but have been getting cold feet about the extreme matte-ness of the Revell decals. So I pulled out an old Microscale Bf-110 sheet and swiped as many markings (mostly the wing and fuselage crosses and the swatstikas, which Revell does not provide anyway) as I could. I still will need to use the Revell decals for the squadron crest and individual ID letters and possibly a selection of stenciling, but I think I can bomb enough clear matt over the top to blend them in. I guess we’ll see when the final shots are taken.
I still need to put some work into the Hawks (masking and attaching the canopies, painting the wheel wells and gear white) before getting to the exterior painting. As you can see, the Sukhoi T-50 has gotten its cockpit installed, and the F-22 and J-10 are patiently awaiting their appointment at the paint shop. The F-111 and Ju-88 are starting to give me the evil eye, however, since I haven’t even masked them up for their next paint color. 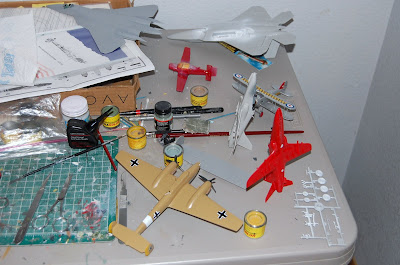 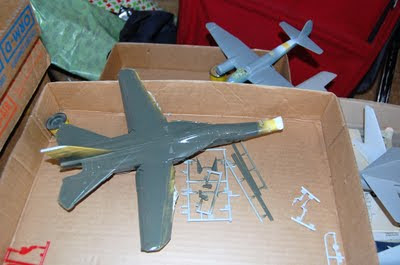 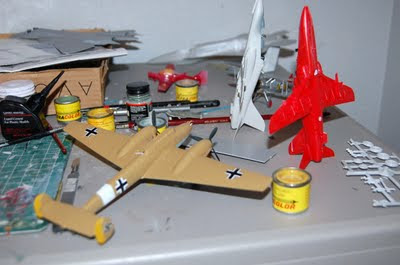 Posted by Kevin Callahan at 3:13 PM