We all have projects that seem to drag on forever. Loss of interest, lack of modelling time, enthusiasm for a new project. But there comes a time when you need to finish the thing and move on. Such was the subject of the most recently finished model. I started this Minicraft B-24, I believe, before the Hasegawa kit came out. It is a completely competent kit which fits well and, except for the canopies, doesn’t present any great problems for the average modeller.
The cockpit canopy did not want to cooperate. The problem was primarily in the separate side panels. I probably should have just kept on sanding the edges until the fit, but that didn’t seem to be helping and I finally ended up just forcing them into place. The result was a pretty sub-par effort, but by that point Captain Impatient was making his presence felt.
Painting was pretty straightforward, though time consuming. Hail Columbia! is one of the Ploesti raiders, and is painted in a somewhat non-standard scheme of Desert Sand over Neutral Grey. There being no direct Xtracolour paint for this, I eyeballed one of their US light tans that seemed to fit the bill. Decals came from the Aeromaster raider sheet, 72-025. According to the sheet, the plane belonged to the 344th Bomb Squadron, 98th Bomb Group and was based in Benghazi, Libya. It was piloted by Col John Kane. It used the post-Torch yellow ringed national roundels.
One thing I should note was that I used Cutting Edge masks. Those little suckers do not wish to release once they’ve been on for a while. Getting them off was quite a challenge, and even the usual application of WD-40 to polish up the glass once they were off seemed to get all of their adhesive off. Whatever they were using for glue was pretty powerful stuff.

I am in the middle of a long-term heavies of WW2 project. So far I've finished a B-29, B-17, Lancaster, Stirling, and this B-24. I have an Fw-200 that is just needing some additional paint and decals, and then it will be on to what I am told is a pretty nice Zvezda Petlyakov Pe-8.
This is completed model #355, finished in May of 2011. 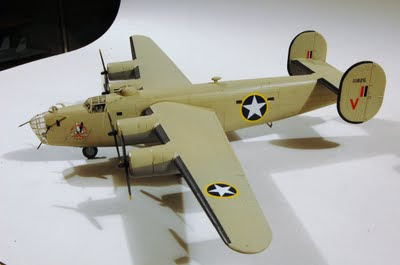 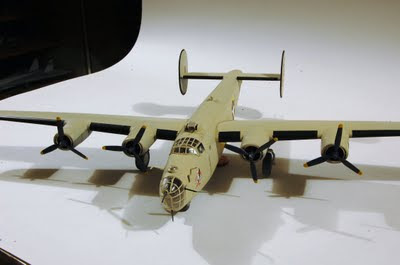 Posted by Kevin Callahan at 2:59 PM