I was actually pretty happy with the way the J-10 turned out, though unfortunately I can’t really say that for today’s finished model. The problems were all my own fault, and the proper attitude is to make some notes on what went wrong and move on.
This is the Hasegawa North Africa boxing of the Junkers Ju-88A4. I’m a sucker for desert markings, and decided this would be a good follow up to last year’s Hs-126 and Hs-129. Like many Hasegawa kits it feels over-engineered in order to allow for the maximum number of boxings. This makes for a few seams that aren’t really needed.
But I managed to pile on the errors too. Miserable cockpit canopy masking ended up with some stray RLM65 making it to the inside of the front canopy, and some of the canopy framing being indistinct. But worst was the RLM 80 mottling. This is the second version on this kit; the first was truly lousy, and I decided to respray the RLM79 and try again. I’m not convinced that version 2.0 is much better than the original, but my unavoidable impatience kicked in again and decided that this is what I was going with. The fix, as we all know, is a compressor with a variable pressure valve so that the pressure can be cranked down to facilitate the small mottling. But that isn’t going to happen until my income returns.
Still, it is what it is, even though it will likely spend its days in the back half of the display cabinet.
This is completed model #362, finished in August of 2011. 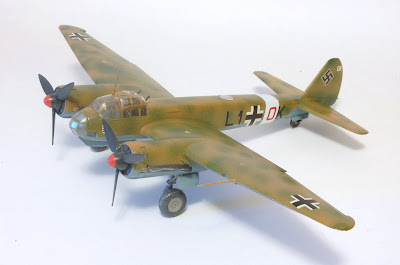 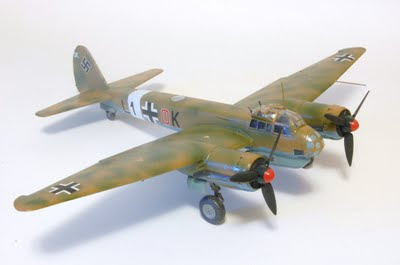 Posted by Kevin Callahan at 7:40 AM