The end of year festival of completed aircraft continues. Today’s example has a bit of a history to it. Being a serious P-47 fan, it is one of the types that I have built multiples of (some 20+ at last count). Good available kits and decals, lots of nose art, simple configurations are very appealing to a lazy toad like myself. Almost the entire history of the type is available (even including predecessors like the P-35 and P-43 and advanced types like the XP-72 and XP-47H) and this makes for a good little self-contained type display.

The one hole in this was the P-47N. Rather different from the P-47Ds in that it had a completely new wing and some significant mods to the fuselage, you can’t really get there from an early type without major work. Italeri came to the rescue with a kit, but the critical reaction to it was pretty savage. I built one anyway, but kept an eye out for new releases. Eventually Sword produced a version which was generally praised by all the micrometer types, so I got ahold of one and got started.

I found it to be a difficult build. Fit was indifferent (though detail was good), the resin bits were a bother to deal with, and I completely destroyed the wing-front gun inserts. At least the canopy was injected and not a vac. I must say that the accuracy of a particular kit becomes dramatically less important when construction has this many problems. It’s a bit like a High Planes kit; they may be pinpoint accurate, but the bloody things are unbuildable. This kit is in no way on the order of a High Planes kit, but it was a trial from beginning to end.

Since I had had some issues with un-primered Alclad, I decided to paint the overall aircraft True Blue (which was required for the tail and cowling anyway) and use that as a primer. In the end, I used Model Master Alumimum instead of Alclad. As an aside, since hope in 72 Land does apparently spring eternal, I have bought a couple of White Aluminum bottles from Sprue Bros (currently in transit). Maybe they have sold through the batch of paint that was causing me so many coverage problems. I do miss the excellent coverage and look of the Alclad.

The decals came from an Aztec sheet. While “Red-E-Ruth” was one of the options in the Sword boxing, I thought the nose art reproduction was better on the Aztec iteration. This plane was a member of the 19 FS, 318 FG, and based on Ie Shima in 1945. The pilot was Leon Cox, all according to the Sword instruction sheet. 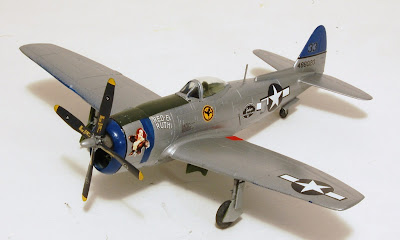 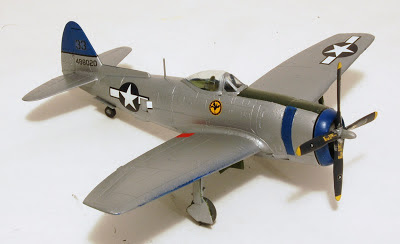