I decided to take advantage of a cooling streak in the weather to spend some time in the hotbox that is known as my hobby room in the summer. Now, this is all completely relative. Warm in the context of the 2011 Seattle summer so far is anything over 75. I believe we have had something like 5 days in the entire year that have been over 80 degrees. This may seem rather wimpy to the rest of the country, which has been in the grip of a huge heat wave. These sort of summer temps are more usual in the Yukon, or even southern mainland Alaska. But one thing is to remember is that almost no homes in the Seattle area have air conditioning. When it is 100 in Southern California, most people stay at home or at most head for their pool. But in Seattle we just sweat, since our position close to the coast tends to bring in lots of moisture too.
So, given that the 10 day forecast has a few more 80+ days in it, I figured I had better hit the model production line while I could. The Valiant has helped out here, since I have been wanting to start this one since it was announced. The entire model is together and the wheel bays and gear have been painted. It is ready for its first coat of white paint.
The Hasegawa Ju-88 is up on its gear, waiting for gear doors and decals. But right now the spotlight is on an Italeri F4U4 Corsair. I tend to think in terms of uncommon paint schemes, even with relatively common aircraft types. And I think I found one.
Since Greg Drawbaugh attended our IPMS-Seattle Spring Show this year, I took the opportunity to get some of his Draw Decals. Specifically, a Corsair that was raced at the Reno Air Races in 1969. It was fairly stock, though painted in an unusual teal color. This provided the first hurdle to jump, since there was nothing like the color in the usual paint line that I use (Xtracolour). The decal sheet does make some suggestions, but it was quite a while before I found a copy of the Model Master acrylic. Another hurdle, since I have never used acrylics, being completely content with the Xtracolour range. Trial and error got me to the point that I was satisfied with the finish. I thinned it with lacquer thinner, which is probably 28 different flavors of Wrong, but much to my delight I did not find a steaming melted pile of plastic when I came down the next morning to see how it had dried.
This particular type of Draw Decal is digital silk. They are notoriously fragile, and come on a continuous carrier film, but the advantage to the process is that it allows for the lower print runs that can support the oddball paint schemes I prefer. And it was indeed a tense ride, just waiting for one of the decals to curl under and render the whole project dead in the water. But thankfully they did not. I went easy on the decal solvent too, for fear of reactions with the acrylic paint. This type of decal doesn’t really need much solvent in any case.
This is completed model #360, finished in July of 2011. 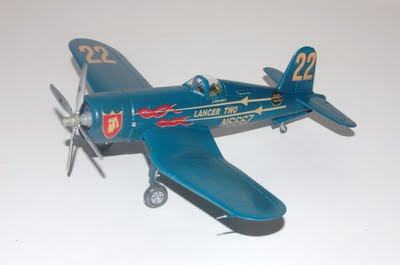 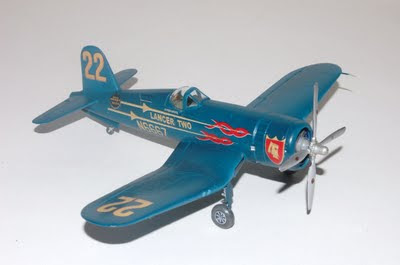 I’ve attached photos of some other work in progress. The Valiant and Swift are finished with major construction, the J-10 has its camo started, and the T-50 has newly painted wheels wells. Finally, the 707 has its Braniff black nose painted (though not masked). 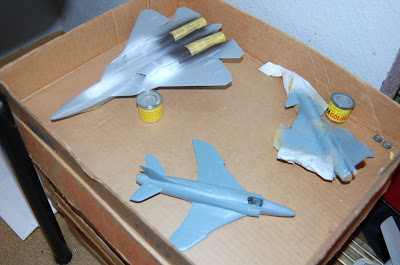 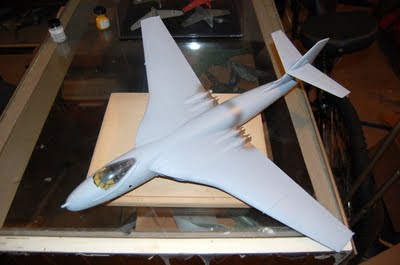 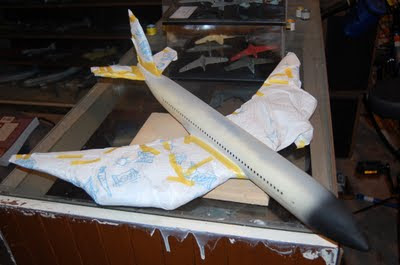 Posted by Kevin Callahan at 8:17 PM