Have you ever started a model for no easily discernable reason, and then lost whatever interest you had in the thing, until you just want to get it done and in the display case – even if it has to sit in the back row? That seems to be what has happened to me with a Hasegawa F-16. I’m not really a great fan of current in-service USAF fighters in any case. Until this point, I had never finished an F-15 or F-16, and the F-22 I have completed was only done in the last 6 months as part of the international fifth gen fighter project. But I figured I could knock out an F-16 while doing a large number of other projects.
Maybe that was my first error: too many projects in play at one time. I am notorious for this, but that native impatience which has been my downfall so many times likes the fact that whenever I have to wait for paint to cure or glue to dry I can move on to another model if I have some spare time at the workbench. Or maybe it was just that I wasn’t heavily invested in the F-16 as a type. Perhaps I was just moving too quickly and didn’t take the time to apply whatever Profoundly Average modelling skills I possess to this one. Impatience led me to a disastrous session with a B-47 (more about that at a later date) and probably worked against the F-16 too.
Since it was a Hasegawa kit, the model went together well, with minimal need to work on seams or details. The painting had some challenges, as it always does for me, but I eventually got to the point where I was satisfied enough to proceed. The major disaster was the decal work. I used an old RepliScale sheet, which had markings for an anniversary DC ANG plane, with lavish tail art. The sheet showed its age in the brittle nature of the markings, and many of them splintered on application. Most I was able to maneuver into position, but the two that were least intact were the striping around the engine intake and – of course – that tail art. Little pieces of red stripe managed to come loose and lodge themselves all over the place, including one that landed on the ANG lettering. I didn’t notice that until after I had applied SuperSol, and there was no chance of getting the offending wandering bits out without destroying the underlying decal. I was able to replace one bit that mysteriously left the model (current whereabouts unknown) by using a Revell kit sheet that came with the same DC markings. I probably should have stripped the tail and started over but by this time I was just anxious to see the back end of this one. Bah!
I hereby resolve to take a deep breath before starting work on the next project in my queue.
This is completed model #372, completed in November of 2011. 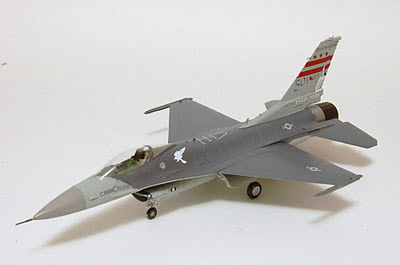 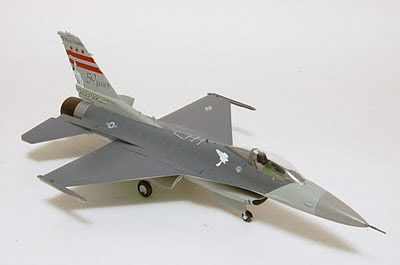