Every so often I have the sublime pleasure of rescuing something from the Shelf of Shame. It is most often a kit that posed some seemingly insurmountable problem, or just got to a point where I had to disengage and go work on something else. “Disengage” eventually becomes “ignore” and the half-finished model stares sullenly from some dusty perch until either guilt or boredom compels one to finish it up.
Today’s odd little finished example is a prime example. I’m really no good at vacform canopies, and that’s what killed this one. It is an early Special Hobby kit of the Sack AS-6. Not exactly a household name. It is an experimental circular wing plane apparently developed by an amateur enthusiast on a farm in Bavaria during WW2. He eventually got the concept to a point where it was a flyable full size prototype, and asked for Luftwaffe help in testing. Though you would think they might have better things to do, they seem to have tested it enough to realize it was underpowered and an aviation dead-end. It is still a unique and distinctive airplane, though, and will be nice to place it in a lineup with the already completed Hasegawa F5U and the Sword V-173.
With only about a dozen parts – my kinda kit – construction was not bad until I got to that vacform canopy. Somehow I never got the fortitude up to tackle it, and on it went to the Shelf of Shame. But last week I pulled it down and determined to finish it. Cutting out the canopy itself and masking went without issue, and although there was some fogging from the superglue, I think it turned out well enough to go on the shelf.
I used the usual Xtracolour paints; in this case RLM65 and RLM71. These are kit decals, and of that species of Czech decal that loves to attach itself to a model wherever it first touches, like the proverbial limpet. And then it refuses to move. The secret, if you can manage it, is to literally float the decal over in a sheen of water and maneuver it in position, then tamp it down with a paper towel. You’ve really only got one shot though.
This is completed model #373, finished in November of 2011. 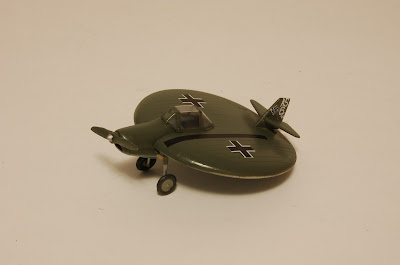 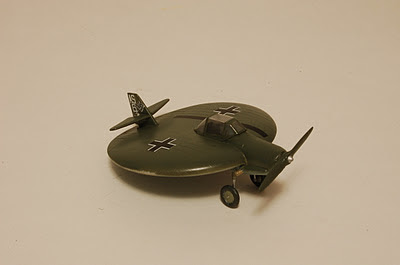 Posted by Kevin Callahan at 3:51 PM