Having just recovered from National Metal Day, and having my head properly banged by long stretches of Dio, Sabbath, Judas Priest, Iron Maiden, Ozzy, and other denizens of the metal underworld, I thought I should crawl through the stack of tequila bottles and get something posted on this blog.
So far, in the current service series of Eurofighter Typhoons, I have finished models of 3, 17, and 29 Squadrons. This week I finished another single seater in the markings of 6 Squadron, which is the latest to become operational. Only one more to go in the series (11 Squadron), at least until the RAF decides to expand the total number of squadrons. Not sure when that is scheduled, given that they seem to be in a definite shrinking mode at present.
The kit is the excellent Revell, which has been released as both a single and twin seater. It isn’t a simple kit, but it is not that difficult to build either, and I think has a much better look than the Italeri or Airfix versions. I have not built (or even seen) the HobbyBoss version, so I can’t comment on it.
So far on this project, I’ve used decals from all over the place. Some kit, some Model Alliance, some Mark 1 Guide. This time around I used the 6 Squadron history sheet from Xtradecal, which is 72127. There are a number of different types on the sheet: Tempest, Canberra, Phantom, Jaguar, F2B, Lysander, Hurricane. It seems that the squadron markings don’t really start to shine until after WW2.
I did have a couple of issues with the model, though mostly due to my own hastiness. The canopy did not want to fit, the airbrake cover did not want to stay closed, and there should have been more seam work done to the wing/fuselage joint. Still, I think that it will look fine along with its three stablemates (four when I get those 11 Squadron decals and another kit). I suppose if I have Eurofighter withdrawal I could build a couple of the examples in the Mark 1 Guide: German and Italian air forces, both with large and attractive tail designs.
This is completed model #371, finished in October of 2011. 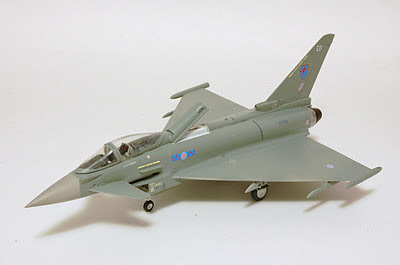 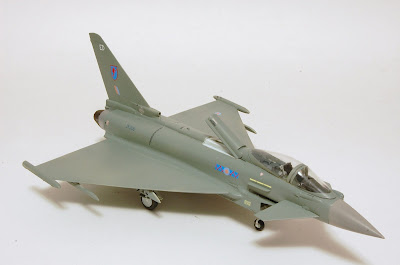 Posted by Kevin Callahan at 5:19 PM