Much to my chagrin, the lack of sufficient enclosed storage space for completed models means that I have to create “temporary” storage cases. Some of these temporary cases are literally 15-20 years old now. I use lumber and non-perforated pegboard to create the box itself, then put a piece of 36x30 glass over the top. I have five of the things now, plus one 36x90 version. Given that the modelling bunker is starting to fill up with models and no storage, I had to go to Lowes last week to get the component parts for another large unit. Since I’m trying to keep the cost low, I’ll actually be using this as a second story of an existing box (no need to buy additional glass that way). Once my income returns to normal I’ll be buying more professionally created storage – in fact I’ve already picked out the cabinet from a local supplier – but this will have to do for now. I’ll try to get a shot of the process of creating these as I work on it.
In the words of Bill Cosby, I told you that story so I could tell you this one. Sometimes those glass lids break. Generally, it is something falling from above, which means that damage is always done to the models within. I’ve gotten competent at model repair over the years. One of those damaged models was the following PBY Catalina. It has been sulking in its injured state for a couple of years, so I decided to bring it back up to proper display condition. Since it was out, I also took a couple of shots to add to this blog.
This is the Academy kit, which I remember as being a really a nice build. I believe I used Aeromaster decals for the Coastal Command version, but I don’t have the details in my notes. This model won a second in its class at the annual IPMS-Seattle Spring Show. The wheels and props were where the damage occurred; hopefully it isn’t noticeable now.
This is completed model #244, completed in January of 2002. 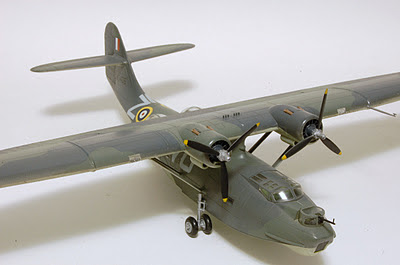 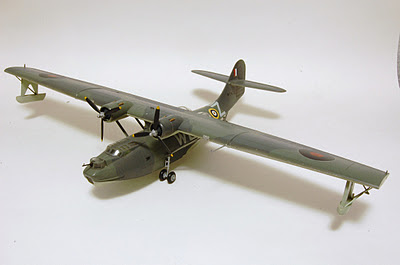