The first completed model to be displayed in the month of June is one that has received a huge amount of praise since it was released earlier this year. It is the Eduard Grumman F6F3 Hellcat. And I must say that it deserves all the kudos it has received. The fit is excellent, detail restrained but perfectly visible, and there are nice little engineering touches all over the model. The way the rear cockpit windows fit together is sheer bliss (I assume they are solid panels in the F6F5 since that doesn’t have the same windows) and even the landing gear doors are given solid attachment points.

Over on the 72 Scale Aircraft forum, this has to be the most built new kit of 2012 so far. There have probably been half a dozen displayed in the few months that the model has been available. Not necessarily what you would expect for an aircraft type that had been kitted competently before and has a fairly limited number of paint scheme options. But it is nice to see high quality actually getting some love on the forum.

But of course my markings had to be somewhat out of the ordinary. A couple of years back I bought a copy of the Draw Decals F6F3 racer “Little Nugget”, owned by one of the operators of Alaska Airlines. As you can see by the pictures, it is overall White (I used Model Master semi-gloss) with some seriously delicate gold leaf decals down the side. Even the instructions mention how delicate they are, which would seem to be setting up for one of those occasional decaling disasters that have been known to occur here on the 72 Land production line. However, they behaved flawlessly – with a lot of water to float them in place and focused handling.

About the only kits I’ve been buying in 2012 are the ones I know I plan to begin work on immediately, so my percentage of recently released kits has been high in the last year (F6F, Swordfish, Gnat, Valiant, with a Halifax in process). And I can say unreservedly that this is a kit that is well worth your attention. Hopefully this will encourage Eduard to revive their 1:72 programme, which has languished a bit in the last few years. 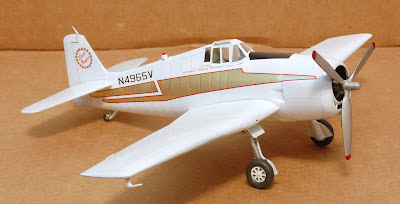 Posted by Kevin Callahan at 5:33 PM