One of my intentions this summer, when I am not distracted by the insidious influence of yard and mountains, is to make some inroads into the Shelf of Shame. One of the advantages of being involuntarily semi-retired (ie, unemployed) is that you have enough time to actually do things like give attention to neglected models.

Today’s completed model has been on the Shelf of Shame for at least 7 years, which is technically long enough to have it declared legally dead. It stalled when it came to a tricky masking job for the fuselage sides under the wings and tail. I had to shoot the sides without getting the struts caught in the overspray. But I finally decided to bite the bullet, lined up some Dio concerts from the 80s on the CD player, and settled in for a masking session.

This is the massive Italeri Me-323 Gigant. I decided to do the 6-engined version, since those are relatively unseen in a built condition. But in one of those odd decisions that you don’t remember making at the time, and seem absolutely incomprehensible afterwards, I managed to put skids on it instead of the optional wheels. Now I could see skids on the assault glider version. But it is unlikely the engined version would use anything other than the wheels. And I have no earthly rationale for having done it. But there you are.

There were other issues. Over the many years of residence on the Shelf, a couple of parts were damaged. One spinner cap went missing entirely, and one blade of a prop broke off, never to be seen again. I did manage to find a spinner in the spares box that was pretty close, and welded another prop blade into the missing spot. You can probably spot the bogus prop on the finished model below, but I’ll leave that to your detective skills.

This particular Me-323 was used in North Africa, and sports the very unconventional paint scheme of large RLM79 blotches over the RLM71 top coat. It also has the theatre markings for the Western desert: white under-wing tips and a white fuselage stripe.

It is always gratifying to liberate an inmate of the Shelf of Shame (even with those skids) so this was particularly satisfying. Next on the escapee list is a Lockheed Super Constellation. 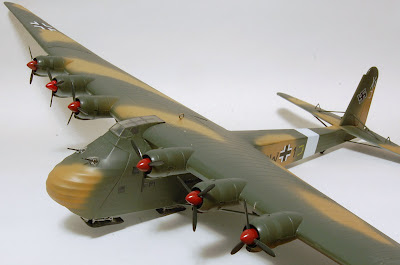