A cluster of Polish light aircraft

The second project comes completely out of left field. I was reading a posting on one of the forums I follow (most likely 72nd Scale Aircraft) and came across the finished model of a RWD-5. It is a small civil aircraft from the Polish aircraft industry. It seemed nicely done and something one doesn’t see very often, which I always find alluring. When I wandered down to the garage, I found that I had 4 of these RWD series planes in 1:72 (and a Czech Skoda D-1 I’ve been meaning to knock out for a while now), all of which are from obscure Eastern European manufacturers.

The decals have that dire look of ones that will shatter once they get a good look at a cup of water, so I’ll have to be careful when applying them. The plastic itself doesn’t look very much better. Still, to quote Star Trek 2, a project like this “has the virtue of never having been tried”. I’ll be doing the aforementioned D-1 and the RWD-5, -6, -8, and -14. Light a candle for my sanity, someone. 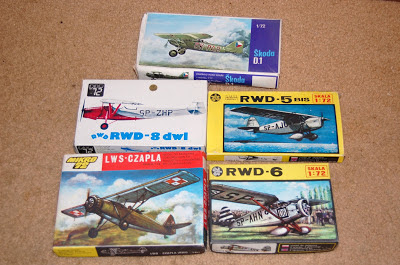 Posted by Kevin Callahan at 6:15 PM