Well, that was unpleasant.
After our 8-12” of snow, we got a weather condition that we only see about once a decade here in Washington: the ice snow. While unarguably beautiful, it is hugely destructive and dangerous to drive in. And worse, at our house (and about 175000 others) we lost power. Ice badly overburdens tree branches and any that are weak fall to the ground with a huge crash. Very often they take the power lines down with them. 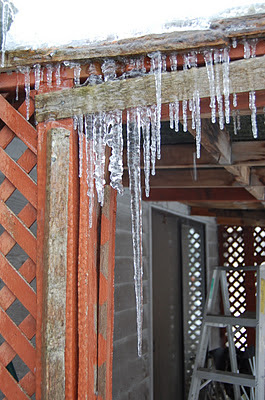 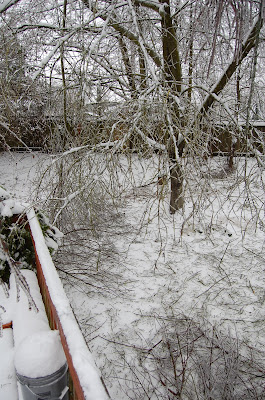 You don’t realize how tied in you are to modern conveniences (internet information, music, even light and heat) until it goes away. With the outside temp a chilling 26 degrees, the house eventually dropped to 40 inside. Lots of windows and clearly insufficient insulation. It wasn’t hard to set up near a window, in about 10 layers of clothing, in order to read during daylight hours, but the nights with candles and flashlights did seem to go on forever. It went from an adventure to a chore to a bore to growlingly frustrating.
After 2 days we did get our power back, just as we were all about ready to strangle each other. But once I got on to weather.com to see what the forecast was, I found we were in line for a wind storm! A blizzard, followed by an ice storm, followed by a wind storm? Just exactly who did Washington get mad at them, anyway? Visions of losing power again chilled us worse than the winds, but as it turned out the power stayed on all night long.
As I write this, there is still significant snow around, but the roads except deep in the housing tracts have all melted down to asphalt and the 10-day forecast doesn’t even show any lows below 30. So it appears the remainder will gradually melt away and we can get back to our usual 6 months of grey overcast and light rain. And all to the good, since I have storage to complete and models to fill them with to build!
I’ve expanded the Photobucket album with additional pictures taken during the ice phase of our triple storm experience.
http://s958.photobucket.com/albums/ae67/a172ndguy/Snowfall%201-18-12/
Posted by Kevin Callahan at 5:38 PM