Today’s finished model was another part of my attempt to get back into full production after the first of the year. I wanted something fairly simple and straightforward. Something that was not going to fight me every step of the way. Simple construction, and not too complex a paint job. I have found that the new wave of Airfix kits fit this bill admirably. I happened to have the Airfix PR19 on hand, so it went into the build queue.
I already have a Spitfire in the Medium Sea Grey over PRU Blue scheme, but I believe that is a long-winged high-altitude FR7. And the PR19 is gunless, which adds a little visual distinction as well.
Construction was quick, though one problem did crop up; one that I couldn’t fix by the time I found it. The little clear piece that provides the upper fuselage camera window didn’t quite seat in to its proper place. I didn’t see it until the fuselage halves were together. It looks a bit like the rear window is rolled down. My fault, emphatically not the kit’s.
I also had some issues with the Airfix decals. Though nicely in register and sharply printed, they did silver a bit, especially the serial number. And this was on what was, at the time, a very gloss Xtracolour coat. On the 72nd Aircraft board, I have learned that some will deal with this by applying liquid cement over the decals to soften them (SuperSol/Set had no effect). Apparently it works pretty well, but my mind immediately leaped to the dozens of ways that little process could go hideously wrong. So it stays the way it is.
This is completed model #379, finished in March of 2012. 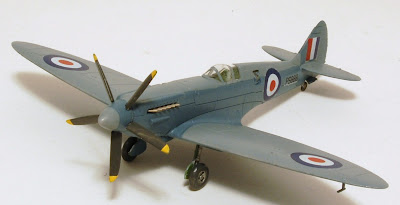 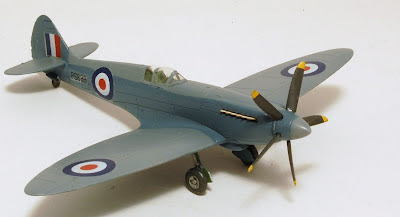 Production is stepping up these days. I should have as many as 4 or 5 completed models in the next couple of weeks. Probably not a bad thing since outside projects such as landscaping and day hikes will be calling inside of a month or two.
Posted by Kevin Callahan at 11:38 PM