Longtime readers know that I like P-47s. An outstanding kit (Tamiya), lots of markings with nose art, and except for the NMF ones, relatively easy painting requirements. So my annual production will often be peppered by the occasional Thunderbolt.
While trying to jumpstart my modelling mojo this winter, I decided to work through a couple of Tamiya kits of the type, one razorback and one bubbletop. The razor was the first to cross the finish line, due to some problems with – what else – the Alclad finish on the bubbletop. Though I suspect I’m the culprit for once, and not incorrectly produced paint. Anyway, more on that later when it emerges from the production line.
One of the many aftermarket decal sheets that I have for P-47s is Aeromaster 72-188: Debden Jugs pt 1. All five razors on the sheet sport the same paint scheme – Olive Drab over Neutral Grey with White tail markings and cowl ring. All have nose art. I’ve already completed one from this sheet: “Wela Kahao”. This time I decided on “Little Butch”, flown by Gil Ross of the 334th FS in 1943.
As usual the build for a Tamiya kit went wonderfully. Now that they have produced another entry in their 1:72 series (the stunning A6M5 Zero), fingers crossed that they are going to re-enter the fray and give us some kits on a par with their P-47, Corsair, and Spitfire. Where Tamiya really pulls away from, say, Hasegawa, is engineering and cockpit detail. The Hasegawa stuff is good, but the Tamiya fit and engineering is almost qualitatively perfect. It is always a delight to build one of their kits; I only wish there were more of them.
Alas, these were the last of my Tamiya kits. But I do have 4 or 5 Academy razorbacks, and might just build them all in tandem sometime this fall. I certainly have enough decals for them.
This is completed model #381, finished in March of 2012. 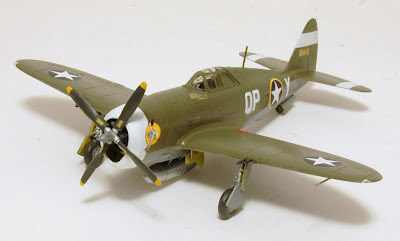 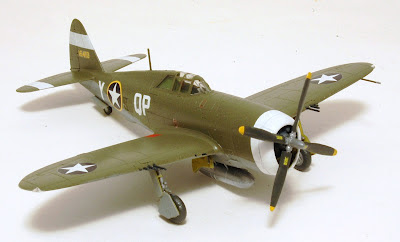 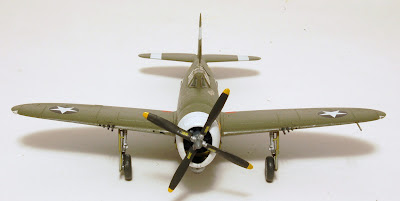 Posted by Kevin Callahan at 9:34 PM