An iron rule of modelling is that if things are going bad on your production line, stop and find an alternate hobby to occupy yourself until the troublesome patch passes. The inverse to this is when you are having some success, keep on going at full throttle.
My last adventure in the paint shack (umm, garage) went pretty well. The gloss Xtracolours behaved themselves, I found a bottle of Alclad that actually worked, and there were no runs, big flecks of dust, or other disasters. So I got back in there tonight to push ahead. This included the Neutral Gray lower surface on the razorback P-47, the PRU Blue coat on the Spit PR19 – though that showed up a big gaffe with the alignment of the camera window in the aft fuselage – the Admiralty Grey on the two BAe Hawk cockpits, and Alclad Aluminum on the landing gear and wheels of both P-47s. I may have to do some buffing on the exteriors along with a reshoot for surface, but I’m pretty happy with how they turned out. 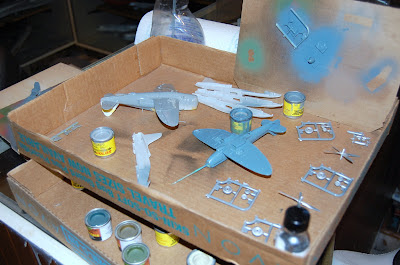 Also over the last couple of days, that most beloved ritual of all modellers occurred: a series of boxes arrived from online retailers! A minor buying spree. So if you hear a scream off in the distance, it probably means my wife has stabbed me with a pair of knitting needles.
The first came from Lucky Model, and included the Meng Katsuodori and the much-maligned Revell Halifax. The Katsuodori is a neat little IJN46 and is the first aircraft from Meng. Simple but well-molded; I’ll be starting on it once some space opens up on the assembly line. And the Halifax. This kit has gotten some of the more savage reviews from the online community due to some rather silly errors in the engine nacelles and props. The nacelles are noticeably too big, though I doubt a non-RAF fan would pick it out without prompting. Anyone who has been reading this blog knows that detail accuracy is not my primary attraction to modelling, so I was going to build it regardless of the problems. But I did discover that Colin from Freightdog was producing an “improvement set” that at least attempts to downsize the radiators a bit and give you a better set of props and wheels. So I got one. I’ve got to be honest and say that I think it will get me to a satisfactory point with the model, though your mileage may seriously vary.
Next was a box from Sprue Bros, including the Quickboost P-47 leading edge gun inserts. This ended up being my solution to the teeny plastic piece that popped into an alternate continuum while I was trying to insert it into the wing. It was considerably cheaper than buying an entire “A” sprue from Tamiya America. Plus it has the advantage of drilled-out gun barrels. A double win. Also from Sprue Bros was the final Eurofighter necessary to complete the series of 5 (each squadron in the RAF currently flying the type). I believe the last one is 11 Squadron.
Finally came a shipment from Great Models. This was an unfortunate episode of retail therapy, since I was getting mightily frustrated with the job search at time of order. Three kits: Eduard F6F3 Hellcat, Skunk MQ-9 Reaper, and Special Hobby BP Balliol. I had not intended to buy the Hellcat, since I don’t have much inherent interest in the type. But the reviews have been so glowing, and I did discover I had a Draw Decals set for a racing version of the type. The MQ-9 was included since I like building drones (no canopy masking!) and I’ve already done the two Platz/Italeri types, the RQ-1 and RQ-4. When Platz gets around to releasing the X-47 I’ll get that too. Finally, I’ve always been a fan of RAF training types, so the Balliol was a given. Interestingly, I had my copy of the Pegasus Balliol out in mid-2011 to decide if I wanted to put it in queue. But the buildability on Pegasus kits isn’t super-high, and my attention went elsewhere. Now I can retire the older kit and concentrate on this one. When are we going to get a Prentice (beyond the now-unavailable Dujin resin?) 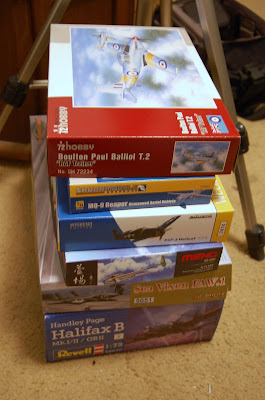 Posted by Kevin Callahan at 9:12 PM