Some activity in the queue

Though a lot of my free time has been absorbed by my temp position, I still have gotten some time at the workbench in the last couple of weeks. As usual, it breaks down into two basic categories: painting and construction.

On the painting side, I spent some time doing up the cockpits for the three Soviet trainers (MiG-AT, Yak-130, and Su-28). I used Xtracolour’s Russian cockpit blue-green, though I have to admit that it seems a little bright to me. If I had it to do over, I suspect it could have used some light grey mixed in to make it a little more neutral. Still, it was pleasant to make some progress on these three models that had been languishing.

I also painted the cockpits of two Hasegawa Hurricanes, did some detail painting, added the instrument panel decals, and finished it all up by doing major construction for both of them. They now look like bona fide Hurricanes. Next up will be masking and attaching the canopy and leading edge lights, and then I’ll mask the landing gear bays. One of the 2c’s guns has separated from the wing (prior to my opening the box) and I haven’t yet found it. I might have to swipe one from an old Heller or Airfix boxing that is moulding away in the far reaches of the stash.

As you could see from my photos of the new display case, Hurricanes are one of my favorite aircraft types. I still have a couple of resin Omega oddball versions (floatplane and one of the foreign trainers IIRC) but I think this is the last of my injected ones. That is, until the new Airfix fabric winged variant is released. Besides being able to do an authentic early Hurri, I should be able to cobble together a prototype version. The main thing giving me pause is the flat-sided canopy. Some options to consider, but unless someone releases a proper conversion, none of them are particularly easy. Still, can't wait for that release.

But here is a shot of the current state of the Soviet trainers, the IL-28, and the Hurricanes. 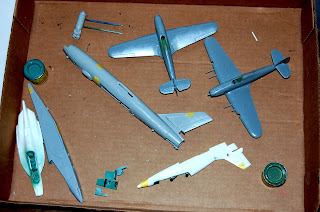 Posted by Kevin Callahan at 8:35 PM