Hawkmania continues to be unrestrained here at the 72 Land aircraft production facilities. Today’s entry is another T1, this time the slightly revised Airfix kit. Mods that I know of include a one-piece canopy, no HUDs in the cockpit, a re-tooled thinner exhaust can, and wing fences that are now molded onto the wing rather than separate. Given that the boxing has only appeared in Red Arrows markings, perhaps the rationale is to simplify the kit for the punters that will be picking up the kit at various airshows and whatnot. In any case, there is certainly nothing in this kit to dissuade the lifer modeler (ie, us) from picking them up, especially at the prices they have been seeing here in the US.

You’d think I’d be running out of Hawk markings, but you’d be wrong. This is the special set worn by a FRADU example from RNAS Yeovilton to celebrate the 100th anniversary of British naval aviation. I think they wore this tail on Sea Harriers too.

Not much to say about the experience except that the kit and decals performed excellently, and I was glad to add another Hawk to the collection. 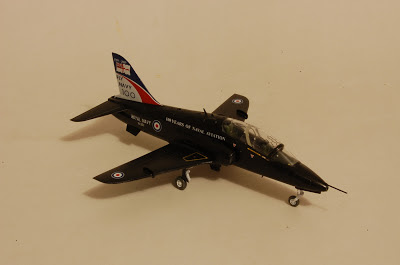 Now with the correct photo!