I have been on a bit of buying frenzy lately, spurred by a number of early summer model completions and – I’ll admit it – some retail therapy when I was feeling sorry for myself when the van’s transmission and my right hip chose the same week to go completely dysfunctional. By and large, these are kits that are on my “buy once available” list, usually by way of Hannants, with some extras thrown in. Some of the packages are starting to arrive and the featured kit will immediately go into the construction queue.

The first of these is the relatively new AZ Models DHC-1 Chipmunk. The variant I was waiting on is the Lycoming engined version. Not for the specific engine, but rather one of the markings variants offered in this box: the British Airways hack version. There are limited opportunities to put commercial airline markings on a 1:72 kit, so I’ll take em where I can find em. It’s entering the construction queue now.

I also picked up an Academy Oshkosh truck as part of my vehicle series. I think this one will have to wait until the Stryker makes it to the complete column, though.

The rest of the items were accessories. A set of Master pitot/guns for the upcoming Me-163. I am really coming to like these Master bits. Masking sets (from Peewit) for the Balliol and Chipmunk (see above). And finally, another set of Hurricane decals, this time from Kits World. Like I need more, but I think I will start with the Iraqi markings. It does have some foreign examples that I don’t have decals for yet. Yeah, that was the reason.

Much more in the mail stream on its way to me. Because 1500 kits just isn't enough of stash for a real man... 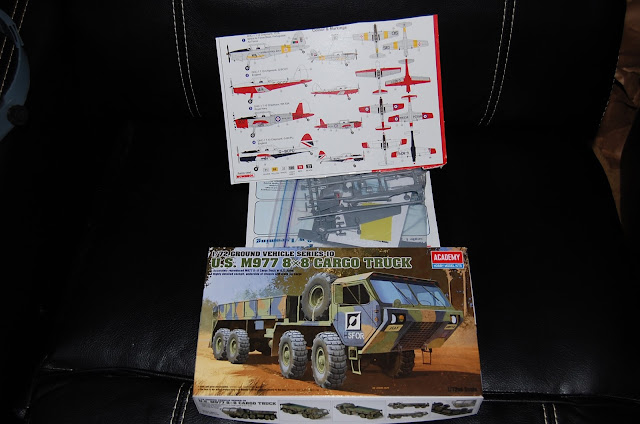 Posted by Kevin Callahan at 5:13 PM