Next up in the parade of fall model completions is another in the fifth gen fighter mini-project. It is the Zvezda Sukhoi T-50 PAK-FA.
You may remember that I had some concerns about Zvezda’s color call-outs on their instruction sheet. They were designating a dark blue (gloss sea blue, in fact) as the dark color in the camo. I have to admit, that didn’t seem right to me. Everything I’ve seen said three greys. As it happened, as I was pondering the issue, the latest copy of Air Forces Monthly arrived with a nice color shot of the prototype in flight. It was clearly a dark grey, or at least as clear as a nice color photo in a mass-produced magazine can be (for me, pretty clear). So even though I had already sprayed on the first coat of gloss sea blue, I buffed it down and shot a coat of Ocean
Grey over it. Nothing special about that – I had it in the airbrush for the Hurricane 2C – but it seemed to capture the color closely enough for my purposes. I’m happy with the choice.
Construction was not difficult, although there were some moments where it didn’t look like the intake design was going to work. You have to bring a multi-part assembly through the inside and locate it in the right spot for everything to line up. It is not instantly obvious, but a judicious session of dry-fitting eventually got me there. Everything else fit the way it was supposed to.
Decals were from the kit, and worked perfectly. I’m not one of those stenciling obsessed modellers, so I didn’t spring for the aftermarket sheet (Begemot, I believe) that has pretty much every little mark on it. The ones provided were sufficient.
The T-50s project stablemate, the F-22, is complete and will be featured on the blog shortly. I also bought the new Trumpeter J-20 so I can have the trifecta. When it is complete I’ll do a family portrait. Seeing them together in the same scale really shows the variations – and similarities – of a group of designs from different countries where the basic design assumptions were clearly very close. I’ll probably also pose the three fifth-gen fighters with a couple of immediate Russian predessors, the Sukhoi S-47 Berkut and the MiG-1.44, and the recently completed Trumpeter J-10.
This is completed model #367, finished in October of 2011. 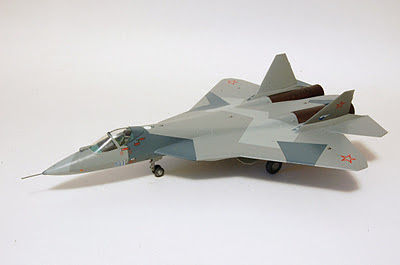 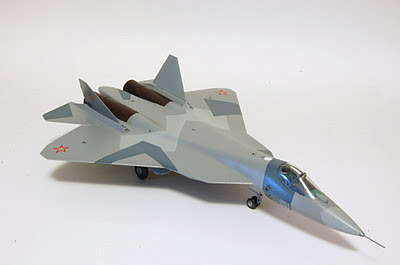 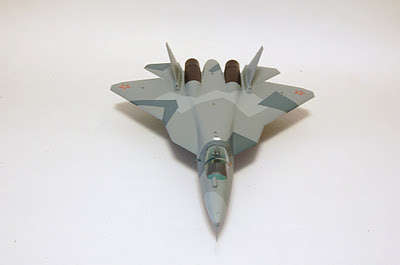 As an update to the Airfix Harrier saga, I have received a message from Great Models. I am to return the Bf-110 in a Harrier box to them and they will send out another Harrier when it returns to stock. Not sure if I’m expected to pick up the return shipping, but my primary concern at this point is getting the proper kit.
Posted by Kevin Callahan at 10:35 AM