Now that I’ve tricked you into thinking that the only things I produce are postwar types, here comes a more traditional WW2 entry. It is the Airfix new-tool Hawker Hurricane 2C. While I would prefer that the Corgi-esque panel lines were a bit more subtle (and I do think they have been toned down on more recent kits, like the Valiant), they aren’t bad enough to bother me. I think I’ve sampled about all of the engraved line, modern Hurricanes, having built a dozen of the type so far, and I think this fits in well with them. Nice fit and easy construction.
There is one area that I think would benefit with a replacement, and that is the prop. Even to my non-engineering eye it looks too small, so I have to assume that if I can detect it, it is probably quite wrong. Pavla makes an upgrade set with all three prop types – along with cannons for the 2D and those distinctive underwing tanks – which is set 72015. Quickboost also has sets for the DeHav prop (72211) and the Rotol prop (72215 and 72221). There are also a variety of detail bits that were originally meant for the Hasegawa kits but could probably be used here as well.
I used the Sky decal sheet (72053) for Hurricanes, The one I chose was the final Hurricane to leave the production line, appropriately named “Last of the Many”. It would make a fitting bookend to a project I’ve been considering for a while – putting together a prototype from the fabric-winged Hurricane in the Sword (and later, AZ Models) early version. Since that kit comes with the two-blade prop and a separate under-fuselage strake, I think the main conversion work is on the radiator, the exhausts, and the panel lines changes necessary for the elimination of the guns. I haven’t done all that much research yet, though, so there may be other things that need to be changed. It was definitely more of a project before we had a ragwing Hurricane to start from.
This is completed model #365, completed in September of 2011. 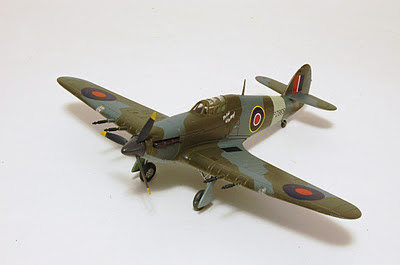 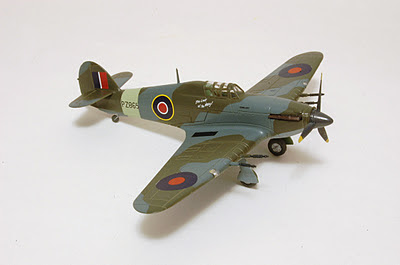 Posted by Kevin Callahan at 7:41 PM