I think that one of the great advantages of 1:72 scale is that so many aircraft types have been kitted that you can explore the odd byways of aviation history and even build up little mini-collections of related types that are of great personal interest. In the larger scales there are still many types that haven’t been kitted yet, and this kind of approach is more difficult. I do like doing long-range projects like USAF bombers, global transports, and odd experimentals. One such project is doing all of the RAF V-bombers.
Until this year, there was one rather gaping hole in the series. Airfix had of course done the Vulcan, and Matchbox the Victor. If it had survived, it isn’t too much to think that Frog would have done a 1:72 Valiant to finish the trio. But it did not survive, and the spot was left to vacform kits, with all of the attendant issues that they present. Mach 2 released a kit a couple of years back (demonstrating both their excellent type choices and execrable execution) but there was only minimal improvement over a vac.
And then the rumors began to circulate about the newly revived Airfix releasing a Valiant. Their TSR-2 had apparently been a success and they were looking to follow up with another home-grown most-wanted type. Gradually the Valiant firmed up into an official release (with a gradually lengthening delivery date, but we RAFophiles rejoiced nonetheless).
The Valiant was one of my two must-own types of 2011, the other being Revell’s Halifax. In the age of the internet, I had to watch all of our British associates getting their kits before the boxes ever reached the US, but finally I learned that Sprue Bros had gotten a shipment in, and an order was immediately placed. Shortly, the box arrived and I immediately made time in the industrial production of the 72 Land factory to begin work.
It is a fine example of the current state of Airfix’s art. Some modellers are more skeptical about the company’s efforts than I am. I admit to being a fan of Airfix’s ability to produce solid efforts at wonderful prices. Sure, I wish they would restrain their panel lines at times, but they seem to be getting that under control. The Valiant’s panel lines are restrained. There are some places that could be refined – I’ve heard the kit likened to a Russian tractor – but all of the large tab and slot connections that I could see were well-hidden in the finished model. I think the shape is well captured and the buildability is high. For the Profoundly Average Modeller, those are the stats that count.
For those who are just getting started on the kit, you would be well served to take a look at the build recaps on Britmodeller.com, especially the long string by General Melchett. He takes a good hard look at what deficiencies there are and suggests solutions for them, always the mark of a useful build review. There are other builds on there as well, which will help you steer by the rough patches.
Not that there are many. I had some issues with the fit around the exhausts, and the instructions could be a bit clearer on the various options (there are a lot of optional pieces that are only correct for particular variants). The bomb bay doors fit pretty well when closed, though clearly designed to be open. The intakes buried in the wing seemed to fit well also. Actually, I would say that there were more issues with the painting (vast areas of white, a notoriously difficult color to spray well) than anything else. There was no masking set available when I built the kit – the dangers of being an early adopter – so I had to do it the old fashioned way. I have to say that due to the small size and large number of windows, a masking set (Eduard 72-299) would certainly have made things easier; probably not one of my best jobs.
While the markings are not extensive, I wanted to follow my usual process and at least take advantage of aftermarket decals. I had bought the Kits At War Valiant sheet before many of the current sheets were out. I’m not sure the sheet is still available since it doesn’t appear on the Hannants list. But right now you have options for different camo schemes from Airdecal and Airframe / Model Alliance; my sheet has only white examples, though this was the scheme I had planned for the Valiant in any case.
Most markings are pretty standard – roundels and serials. The only point of attention is the squadron art, two swords over a white and blue field. No problems with any of the decals. I don't have the sheet to hand and I can't for the life of me remember the squadron number.
I already had a Vulcan in the completed category (along with a what-if project of the “fourth V-bomber”, a camo version of the AMT B-49 flying wing that I named the Vector), so completion of the Valiant makes it three. Next comes the Victor. If I really get ambitious, maybe I’ll spring for the Magna kit of the Short Sperrin, the actual backup fourth V-bomber, in a fit of self-inflicted modelling torture for having avoided the Mach 2 Valiant.
This is completed model #370, finished in October of 2011. 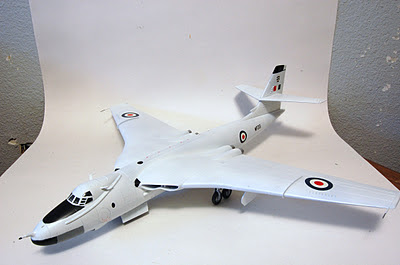 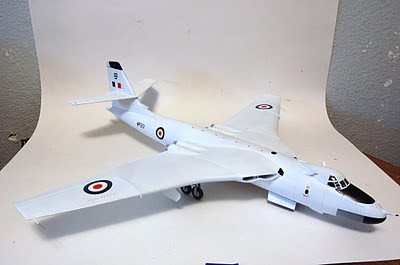 Posted by Kevin Callahan at 5:37 PM