The second item in the initial wave of fall modelling to be completed is the AZ Models version of the Supermarine Attacker F1. AZ kits are a bit rougher than the best short run makers like MPM, but they are still quite buildable. And although I don’t feel to compelled to buy every mark of Spitfire that they have been producing (though the PR1 is tempting) I do understand the economic imperative behind it. If it allows them to continue producing buildable kits of obscure types like the F6U Pirate, Ki-54 Hickory, K3M3 Pine, Gauntlet, and those early ragwing Hurricanes, I’m all for it.
There were some fit issues with the kit, which I solved in greater or lesser degrees of success. The fuselage can use some sanding of the edges prior to sealing it up, and the wing/fuselage joint was pretty awful. The tail wheel has no positive location for gluing, and ended up detached and lost in the fuselage before too long. I went ahead and built a replacement using strip styrene that satisfied me, at least, though those with more of an engineering orientation would probably want to do something a bit more realistic.
Painting provided its usual content of drama, given all the masking that was necessary. You wouldn’t think a simple thing like that patch of Sky between the Dark Sea Grey of wings and the upper fuselage would cause issues, but with the vertical tail surfaces also Sky – well, there was a lot of Tamiya tape on this kit in the painting queue. It all turned out well enough.
Given that the markings are pretty generic for the type, I used the kit decals for the most part. The blue in AZ’s roundels looked suspiciously light to me, however, so I replaced them with Modeldecal postwar types I had in the decal vault. As is always the case with these postwar naval types, those underwing serial numbers were a pain where they crossed the various landing gear doors. Blessings upon the decal makers who provide those in pre-measured pieces that fit precisely on the doors themselves. AZ, however, is not one of those makers, and you are forced to cut them out yourself. Never one of my best moments, and I was mostly happy just to see the end of that decaling session.
Nonetheless, I was generally pleased with the way the model turned out. It certainly helps to expand my postwar RAF collection in the display cabinet.
This is completed model #364, finished in September of 2011. 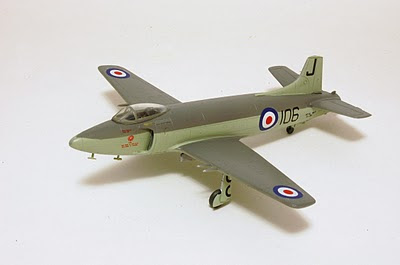 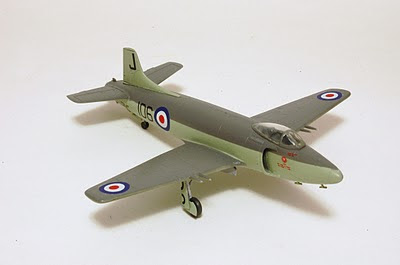 Posted by Kevin Callahan at 3:55 PM