If you were to wander through the 72 Land model dungeon and look at the boxes of unfinished kits, one of the things that would strike you (other than the fact that there are a lot of them) is that I have very few duplicate kits. Oh, there are a couple of favorite types that I have gathered  multiples of – A-4, BAe Hawk, Hurricane, DC-3, and the subject of today’s finished model, the P-47. I have actually completed 22 models in the P-47 project. Most are of the usual bubbletops and razorbacks, though I do have a P-35 and XP-47H to show where the lineage grew from and what it grew into. And there is an Alliance XP-72 that is still waiting in the stash.
Why is the P-47 so attractive? As usual with me, it concerns the markings. While I have no reason to think that there were more P-47s with nose art than, say, P-51s, I would argue that there are certainly more nose art decal sheets for P-47s than any other single type. And I have accumulated most of them in my 26 years of modelling. I could literally build only 1:72 P-47s until the day they wheel me off to the rest home and still probably not use up all my decals. Of course, Tbolts aren’t the only thing I build, so I likely will never reach the point where I run out of either kits or decals.
Every so often a new sheet is published which moves another P-47 to the top of the queue. Such was the case with “Sigma Nu Girl”, one choice on the EagleCal EC107. Besides the large lettering on the side of the fuselage, it was a rare chance to put a late model bubbletop in Olive Drab and Neutral Grey.
I used the Revell kit. While it isn’t the best-building P-47 in 1:72 scale (that honor belongs to the Tamiya version) it is a solid effort that doesn’t miss the mark by much. And in this case I have about a half dozen of the things in the stash. As I said earlier, this is pretty unusual for me.
The Eagle Cal decals are very thin, and require some care when applying them. They do settle down into the panel lines with no problem, and did not require any setting solution. Although there is an error on the sheet – the data block on each propeller blade near the hub is called out in the instructions, but doesn’t seem to appear on the decal itself. Not a huge issue, but you’ll want to source some replacements if that is important to you.
“Sigma Nu Girl” belonged to Greasy Methany, and the reference is to a fraternity at UC Berkeley. It uses the dorsal fin, which is included in the Revell kit, and sports the Curtiss asymmetrical prop. EagleCal notes that Methany’s grandson, Charles, was killed in 2006 near Baghdad, by an IED.
This is completed model #369, finished in October of 2011. 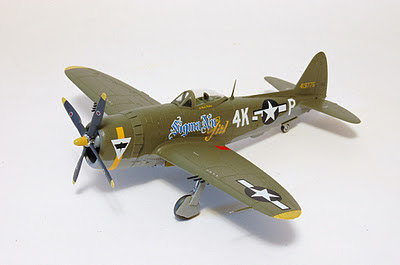 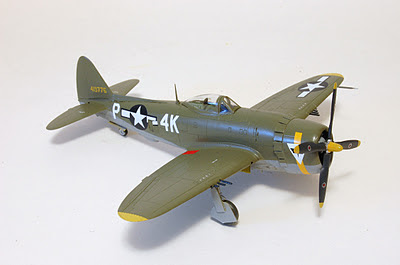 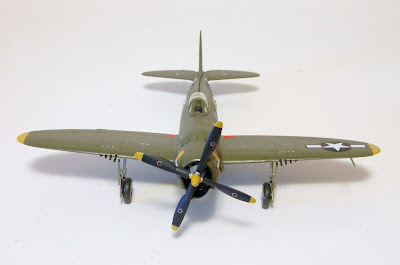 Posted by Kevin Callahan at 3:25 PM