Given most of the types that have been featured in the first 10 months of the blog’s existence, you might be surprised to find that I’m not terribly interested in modern frontline US fighters. I’ve never built an F-18 or F-15, no AV-8s, and my very first F-16 is currently in the painting queue. I can’t say I have any interest in the “my missile is bigger than yours” conversations that seem to go along with types such as the F-22 and F-35. I find myself much more fascinated by the weird little byways of aviation than the best of breed.
Which is not to say that I don’t like experimental types. I had been reading about the Sukhoi T-50 in Air Forces Monthly before the Zvezda kit became available, and thought it would make an interesting comparison with an F-22. Then in the fullness of time Trumpeter announced their J-20, and plans for a mini project were born. The T-50 has already featured on this blog, and the J-20 is currently in construction. But the F-22 has just emerged into the (rather overcast) light of day here in the great northwest.
This is the Italeri kit. I am aware that the Academy version is apparently a better kit, certainly in terms of buildability. But I had the Italeri in the stash, spending was restricted to new kits that I just HAD to have, and the F-22 is just not a type that would cause me to heedlessly throw some bucks around. Going with the Italeri kit does have some minor penalties in terms of fit – there is a seam aft of the cockpit that will turn your hair grey(er). But the detailing on the visible bits like cockpit and landing gear is good and it had the satisfaction of using up something that had been in the stash for years.
Construction proceeded without need for medication, with the main problems other than that seam revolving around the internal weapons bay doors. I have very little interest in ordnance, and have never been one of those who obsesses about what to hang off the pylons. In fact, I typically don’t hang anything at all. That seems to have the effect of concentrating the eye on the airframe itself, primarily the markings. The problem in this case was that the doors for the ventral bay and the two side missile bays don’t fit and are in multiple pieces that are meant to serve both for the choice of open bays and closed bays. In the event I ended up closing the lower bay and leaving the two side bays open. I’m not sure it was the best idea, and I probably should have just built them all closed and resolved myself to some PSR sessions.
Then there was the painting. The overall light grey coat went on well, but my masking for the darker patches on the upper surfaces was pretty mediocre. Plus the dark grey paint sprayed on like that stucco coating they used to apply to Southern Californian houses in the 80s. Even by buffing it down and reshooting it was still rather rough. At this point I was possessed by the familiar demon Impatience and decided to see if the eventual matte coat would solve the problem. Thankfully it did, pretty much, though I still can’t say it is my most technically sound painting job.
Decals were from the kit: the first production Raptor, apparently labeled “Spirit of America”. No problem with the markings at all.
Once I finish the J-20, I’ll get all of the fifth generation fighters together for a group portrait, along with two other large fighter prototypes, the Sukhoi S-47 Berkut and the MiG-1.44.
This is completed model #368, finished in October of 2011. 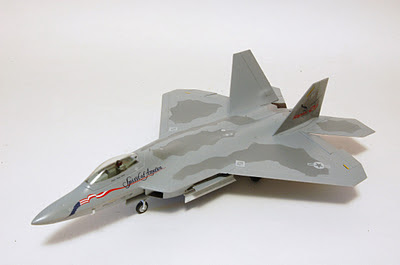 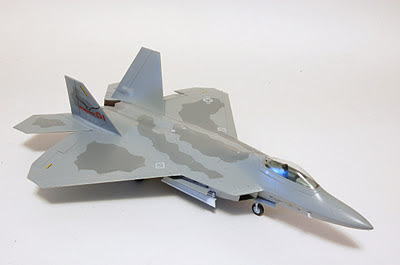 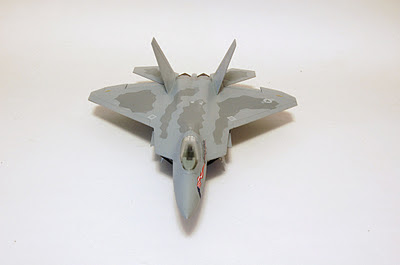 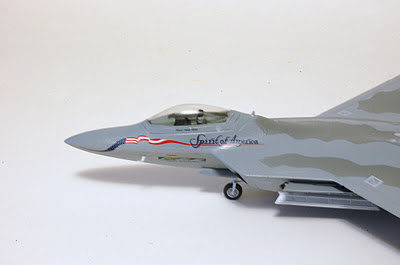 Posted by Kevin Callahan at 5:16 PM