I have a lot of Tornado RAF anniversary decals. A lot. Choices from Xtradecal, Model Alliance, Fineline, and Modeldecal. Many are for GR1s, though there are also a few for the F3 fighter variant. And of course, once I decided to build one, it wasn’t one of the choices from my deep decal stash, but a sheet that only recently appeared.
OK, I especially liked this scheme. It was the 25th anniversary of Tornado F3 use that was applied to a 111 Squadron RAF bird in 2011. It was on Xtradecal sheet 72-132. A big “25” over an oversized roundel on a Tornado with a black spine and tail. It also had the advantage of being fairly timely, since the plane had been seen in most of the current aviation magazines earlier in the year.
I used the Hasegawa kit. Although some of the reissue prices of Hasegawa kits are truly eye-watering, it had the advantage of having been bought when a retailer was having a clearance sale. Tornados are something I have built multiples of, so it is one of the few kits that I have multiple copies of. The Hasegawa kit is well engineered, fits well, and has adequate detail for the scale. There is work that needs to be done to the seam between nose and body, but it isn’t a deal breaker.
It seems that this particular example had wings from an earlier paint scheme, since they are in Barley Grey and the rest of the body is in MSG. The nosecone is a different tonal grey, and I used Neutral Grey. All paints were Xtracolour. On further review, I should have used a different and less stark grey for the wing glove markings.
The decals worked well, and the only ones I applied SuperSol to were the big tail markings, just to make sure they got down into the panel lines and attached solidly to the edge surfaces of the tail. I even managed to get all the little antennae and dangly bits to survive the decaling process, though I think the tiny little dorsal pair of rod antennae must have escaped at least twice.
Still, I have to say I’m pretty pleased with this one. A good kit, nice decals of interesting markings, and a minimum of modeller-inflicted agonies go together for an excellent modelling experience.
This is completed model #375, finished in November of 2011. 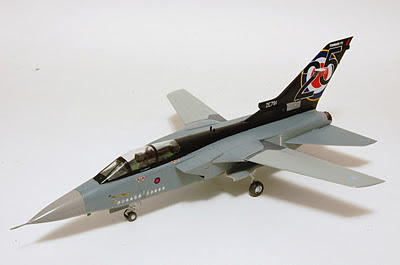 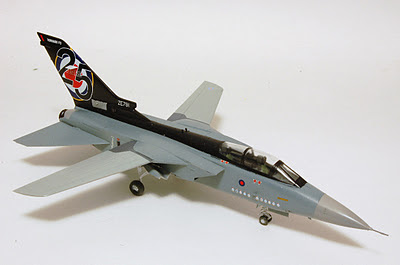 Posted by Kevin Callahan at 4:28 PM