This is my first completion of 2016, and while the paint scheme is rather interesting, it is not one of the better models in my collection. Many of the effects of the 18 month layoff manifested themselves on this one.

The one that was not self-induced was the Eduard black vinyl masking I used on the canopy. I am now officially done with this product, despite that fact that I have others in inventory, unless the surfaces to be masked are absolutely flat. The black vinyl masks simply don't have enough adhesive on them, and tend to pull away on a curved surface. This happened multiple times on the Stuka, so the frame lines are indistinct and smudged. I've tried to clean them up with a toothpick, but that doesn't seem to have helped much. From now on, it is masks made with the yellow kabuki tape only.

But there was some general ham-fistedness on display as well, likely due to the layoff. Almost every dangly bit was broken off at least once. Dive brakes, tail struts, radio mast all took a trip past the Carpet Monster. Thankfully none disappeared forever.

And I made a dumb mistake regarding colors. I left the spatted undercarriage in the undersurface color and discovered they should have been in topside RLM79 with mottled RLM80. Much consideration went in to whether to ignore this or not, but I relented in the end and did a remasking job to keep the underside safe from overspray. The model has decal issues, too, but that is enough self-flagellation for today.

This is one of those models that I probably wouldn't even display online if one of the founding concepts of this blog wasn't to show everything I have built, whether it is good or not. The point is to be a hopeful beacon to those that are reluctant to put pictures of their own models online. I am trying to say that not everything has to be a masterpiece, that adequate models (though I'm not sure this one qualifies) have just as much right to be out there as the great ones. I do have to take a bit of stick occasionally for obvious errors, but that is part of the deal.

This particular Stuka was a R2 Trop, based on the coast of Libya in 1941, where it was tasked with harassing Allied shipping in the Med. It was attached to StG 2.

I must apologize about the picture quality, esp depth of field. I have not been able to reassemble my former photo rig, so these were just shot on a white leather coach in order to get them out before surgery. 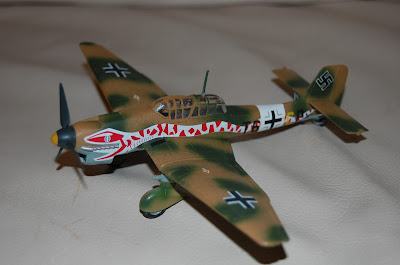 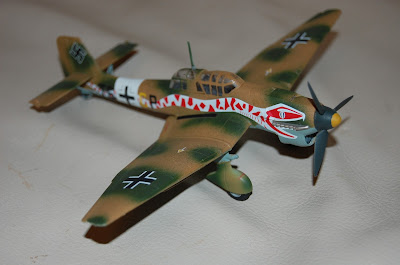 Posted by Kevin Callahan at 8:14 PM