As well as the paint session, I've been able to do some serious construction as well.

I got all the major bits (not including floats) together for the Ear Falls Airways Noorduyn Norseman. Like so many of the old Matchbox kits, this is engineered well and really looks nice when complete. Some seam work will be necessary, and then I can shoot the first paint coat.

I've had a set of Thunderbird (successor to Whiskey Jack) decals for the Arctic Rose DC-3 for a while now, but the only DC-3 kit I have at present had catastrophic damage to the landing gear. Like half-dozen pieces catastrophic. Eventually I picked up some SAC metal gear from Sprue Bros, though they were rather expensive at $13.50 and probably cost more than the DC-3 kit when I originally bought it. But now that I have the gear issue squared away I was able to finish major assembly.

The Eurofighter two-seater that will eventually become a Red Arrows what-if now has the cockpit painted and installed. Major assembly will commence shortly.

And though it is not pictured here, the Special Hobby Trent Meteor and Revell A400M will be working their way into the construction queue shortly as well. 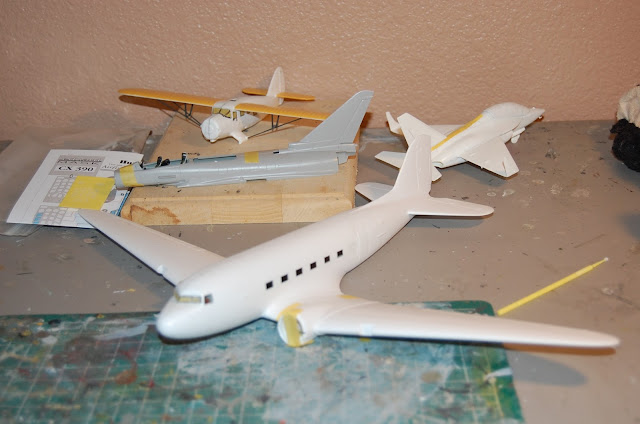 Posted by Kevin Callahan at 4:17 PM