<Sigh>. And it all started with the best of intentions, too. This probably sums up my modelling history in one sentence.

I noted in the DH-91 finish line posting that I thought it was a beautiful airliner. Today’s completion is the smaller racing counterpart to that, the DH-88 Comet. DeHavilland just produced lovely planes, period. (Which means I will likely take a stab at the Heller Dragon Rapide once the civilian Xtradecal sheet comes out). We’ve had the paleolithic Airfix kit and the laughable Frog example (whoever thought those little molded heads were adequate for an interior was not a forward-thinking individual) for what seems like ages. There have been resin upgrades from Heritage and what appears to have been an excellent resin kit from SBS. But no new modern-technology injected plastic kit of the DH-88.

When Kopro announced their version, I have to admit I was ecstatic. I had dreams of a whole row of DH-88s in all the different color schemes, civil and military, and even a couple of whif variants inspired by Tom Z’s website (http://dh88.airwar1946.nl/index.htm).

But then I had to ruin those dreams by actually building the thing. Kopro, like their stablemate AZ, tend to occupy two ends of the short-run kit scale: the high end and the low end. This one, alas, is from the low end. It’s not that the molding is bad or the detail is non-existent, but the fit and the engineering are just not that great. Parts didn’t want to line up, the landing gear struts don’t make much sense (and could have used some indication of where to attach them inside the nacelle), and even the canopy required a fair amount of fiddling. Eventually it all came together, but not something I would take to a contest.

But then came the “Black Magic” decals. To say that they are thin would be an understatement. In fact, a couple of them exploded while moving them into place on the model and became a giant jigsaw puzzle with no clear solution. Gold leaf is not resilient in any case and these were beyond fragile.

So a lineup of Comets is probably not going to happen in my lifetime, though I may eventually test the waters sometime later to do “The Burberry”. It’s like women and childbirth; sooner or later you forget how painful it was and agree to go through it all again. MikroMir has announced a DH-88 as well, though they’ve gone rather quiet about it since Kopro made their announcement. And MikroMir kits tend to share some of the same engineering shortfalls as Kopro/AZ, so whether their kit, if and when it appears, constitutes a substantial improvement over the Kopro kit remains to be seen.

And while we’re on the subject, how is it that we have never had the Caudron C-640 Typhon kitted? Not even Dujin did that one. The only one I’ve seen on the net (on Maquette72.com) was scratchbuilt.

There is also a shot of the two recent DeHav completions together. 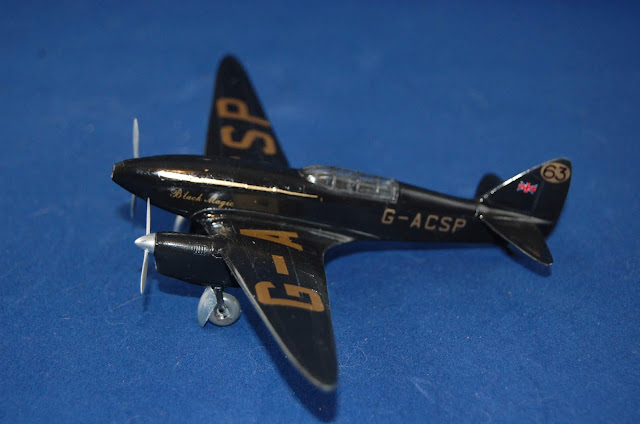 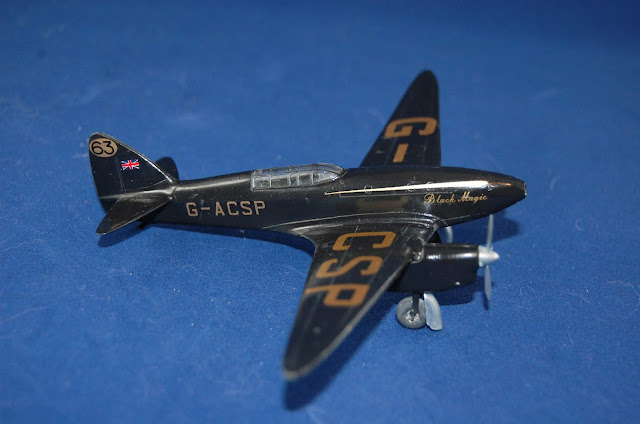 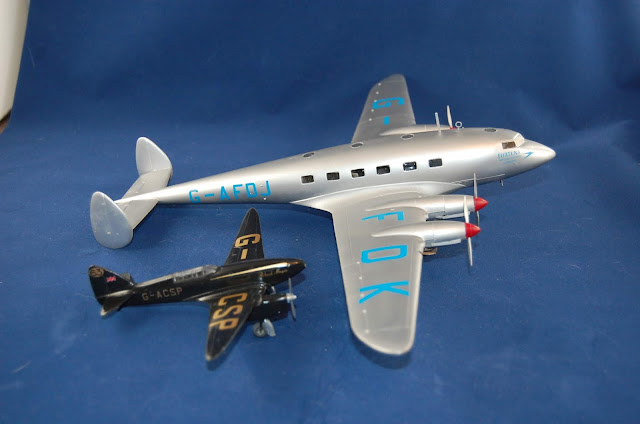 Posted by Kevin Callahan at 6:08 AM