A short paint session tonight, in between a couple of really bad Italian comedies from a Netflix disk called “Spaghetti Western Bible V2”. To be more accurate, they were grindhouse comedies rather than westerns (at least all of V1 were set in the west), with some of the worst DVD transfers I have yet seen. Not unlike a hand-held phone camera copy of a bad VHS copy. But I digress.

The main purpose of this paint session was to catch up on models needing some White details. First came the F3H Demon, where I neglected to properly mask the flaps when I painted its top coat of Gloss Gull Gray. Remask and respray.

Next came the upper surfaces of the raspberry ripple Phantom GR1. Finally there were detail bits on the two razorback P-47s: one needed a white patch on the vertical tail and one needed a white cowling. The paint surface was a little rough when I finished, but Xtracolour paint often levels out in the process of curing. I’ll have to wait and see if it needs further work. Hopefully not; I’m almost out of tins of this color.

The second color was Dark Earth, to patch the mysterious white spots on the Revell Halifax. I mixed the paint a teeny bit thicker this time and it covered everything sufficiently. Next up on that one is upper surface camo masking, unless the thicker mix requires some buffing and a light surface coat.

The He-162 is in the final stretch, and the Sword P-47N is not far behind. Looks like I’ll be able to pad my annual numbers a bit before the holiday craziness really gets into gear. 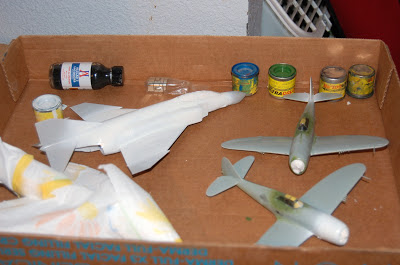 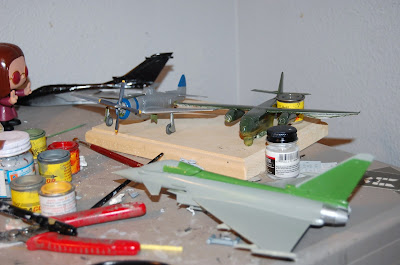