Today’s finished model is in a category that I haven’t featured too often in the 17 month history of this blog: modern frontline jet fighters. I have never finished even the full range of US fighters; I have built an F-14, an F-16, and an F-22, but still haven’t managed an F-15 or an F-18E. But at least today I can cross of the legacy Hornet, an F-18C.

This is the Hasegawa kit, which has some odd engineering decisions and is really more complex than it needs to be. Presumably this is to accommodate variants, although I would think most of the changes would be to ordnance rather than airframe. The multiple parts underneath the LERX are a mystery. But the fit in general is not bad.

The markings came from a Two Bobs sheet that was made as a Hurricane Katrina tribute, and features two aircraft from the Louisiana ANG. The main attraction for this F-18 is the tail art, a snake wrapping around a bomb, and the artwork on the dorsal airbrake door. Both of these two are multiple part decals – as are many of the others on the airframe as well. I gather this is to prevent alignment issues, though it does make for a slow decaling process. Add a decal, apply setting solution, let dry overnight. To a notoriously impatient modeller such as myself, it is a huge temptation to just bull on ahead and finish the job, but I was determined to keep things steady and improve the overall result.

As a closing note, I saw this plane featured in last month’s Air Forces Monthly, repainted into a much more sedate scheme, though the airbrake artwork was still there. We have a trip to New Orleans tentatively penciled in for 2014 or 2015, so this will be a nice little reminder of those plans in the intervening years. 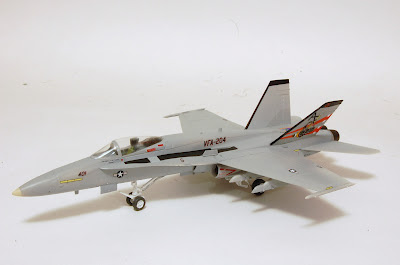 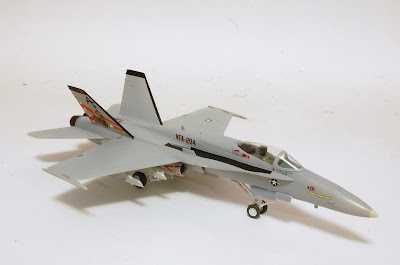 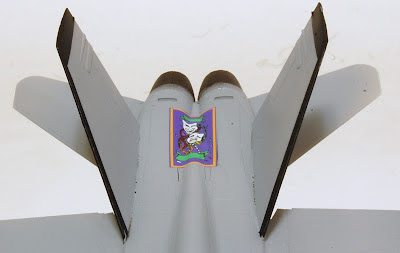 Posted by Kevin Callahan at 1:14 PM